Red Bull Salzburg are set to play Bayern Munich at the Red Bull Arena on Wednesday in the first leg of the Round of 16 in the UEFA Champions League.

Red Bull Salzburg come into this game on the back of a win over Rapid Wien in the Austrian Bundesliga. Second-half goals from American midfielder Brenden Aaronson and Swiss forward Noah Okafor sealed the deal for Matthias Jaissle’s Red Bull Salzburg. A first-half goal from Filip Stojkovic proved to be a consolation for Rapid Wien.

Red Bull Salzburg became the first Austrian side in Champions League history to reach the knockout rounds after finishing second in Group D with 10 points from their six matches, just one point behind group winners Lille. 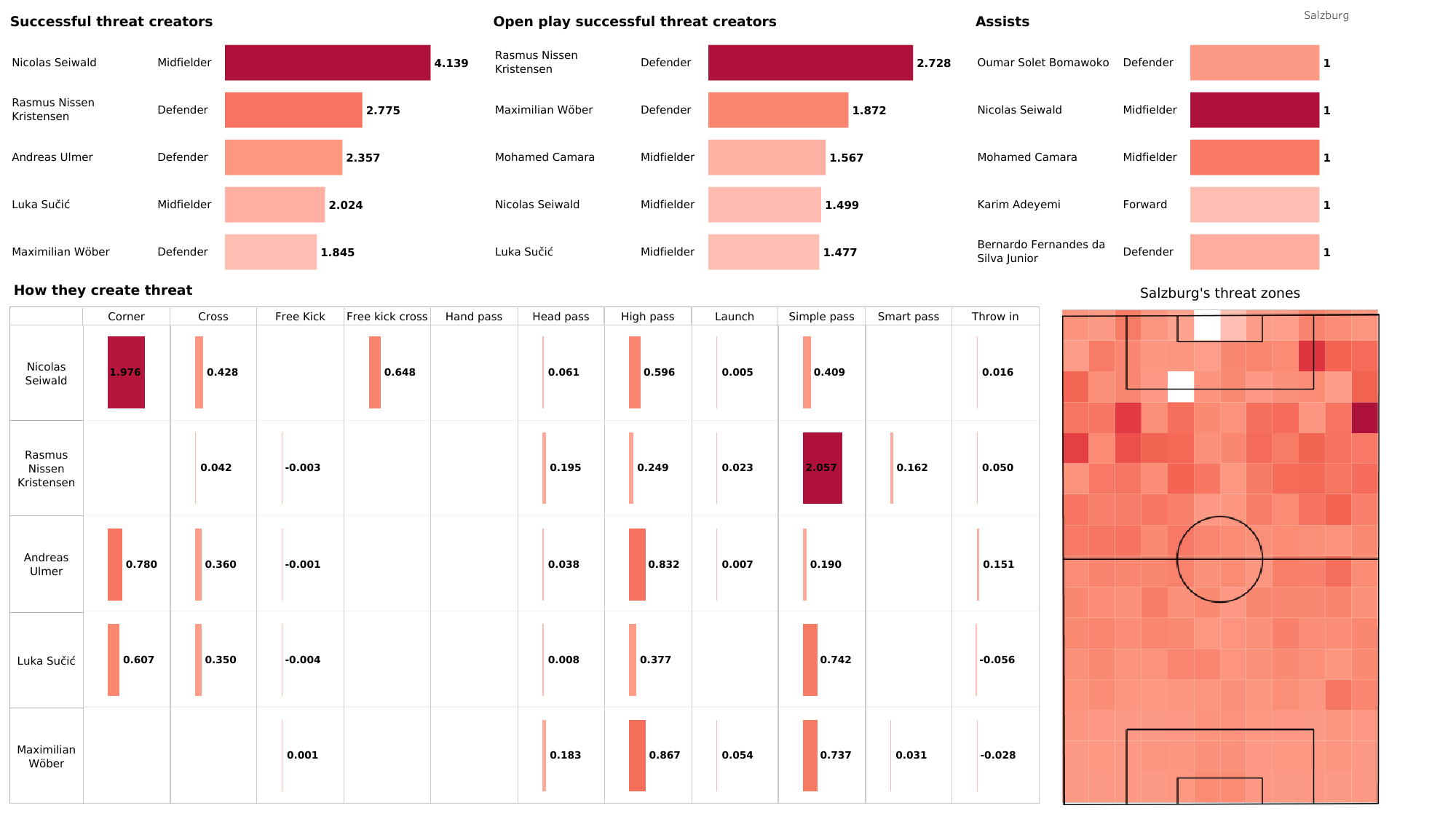 The above visual shows us the xT creation zones for Salzburg this season. The map indicates that Salzburg have been most threatening from the right flank, as they have higher xT creation zones on that side of the pitch. They have several xT creation zones on the left flank as well, which indicates they can attack the Bayern defense from both sides of the pitch when they get into the final third. Rasmus Kristensen and Nicolas Seiwald have generated the highest xT for the Austrian side from simple passes as well as set pieces. Kristensen has generated an overall xT of 4.139 and will look to have an impact on Wednesday’s game. 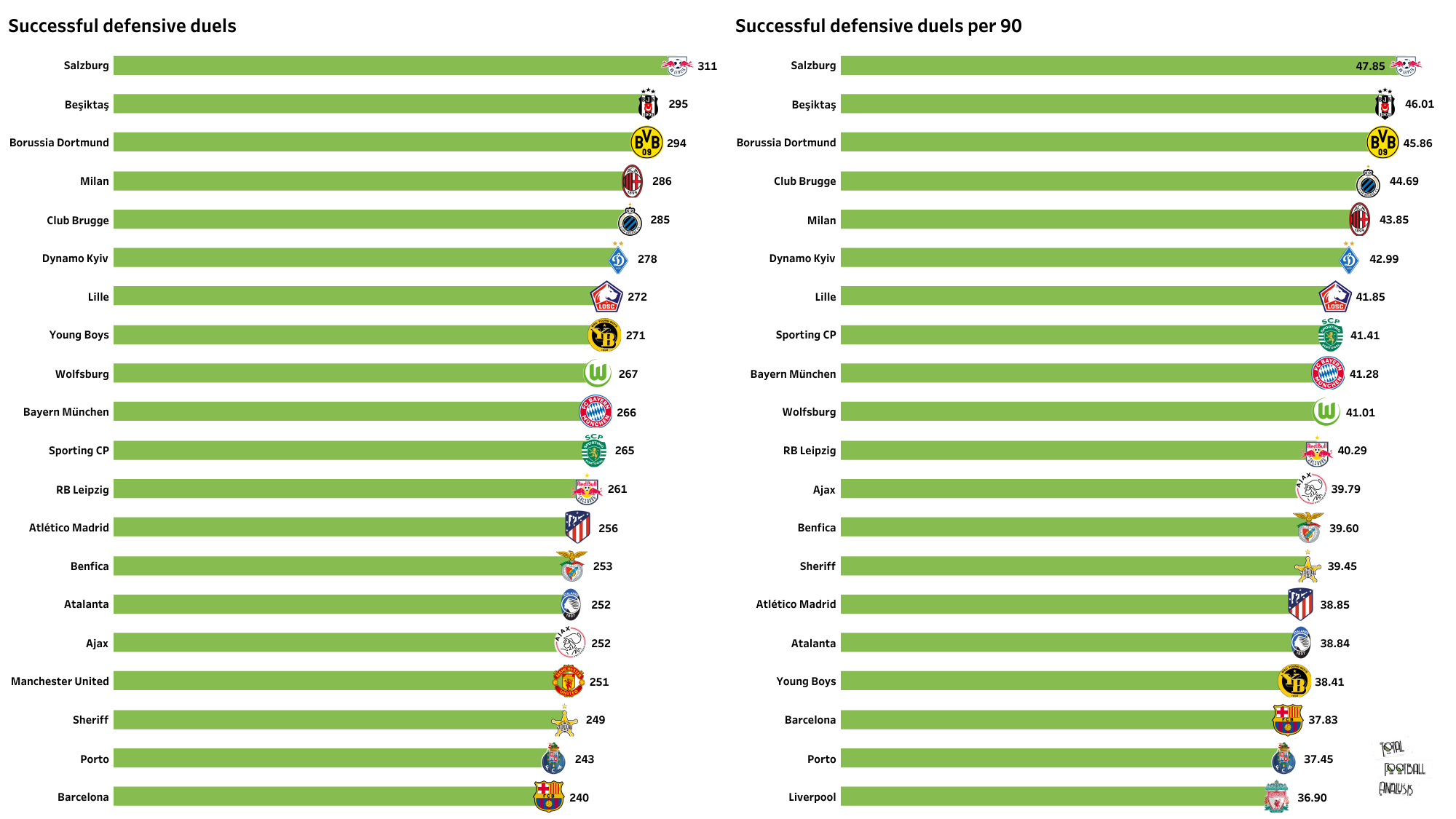 The Austrians conceded six goals in the group phase and were only able to keep one clean sheet. They have the most number of successive defensive duels in the league and have completed 47.85 defensive duels per 90 minutes. Bayern are a very tough team to defend against, which is why Salzburg will have to maintain their defensive shape and try to keep the Germans out of their penalty area.

Bayern Munich, on the other hand, lost 4-2 to Bochum in the Bundesliga. First-half goals from Christopher Antwi-Adjei,  Jurgen Locadia, experienced right-back Cristian Gamboa, and Gerrit Holtmann ensured victory for Bochum. A brace from Polish striker, Robert Lewandowski, was just a consolation for Bayern Munich.

Victories home and away against Barcelona, Benfica, and Dynamo Kyiv saw Bayern Munich dominate their group and move into the last 16 as Group E winners, scoring 22 goals and conceding just three. While their Champions League form has been impeccable, Bayern have suffered a slight blip in the Bundesliga recently, losing two of their last five matches, including a surprise 2-4 beating by Bochum last weekend. 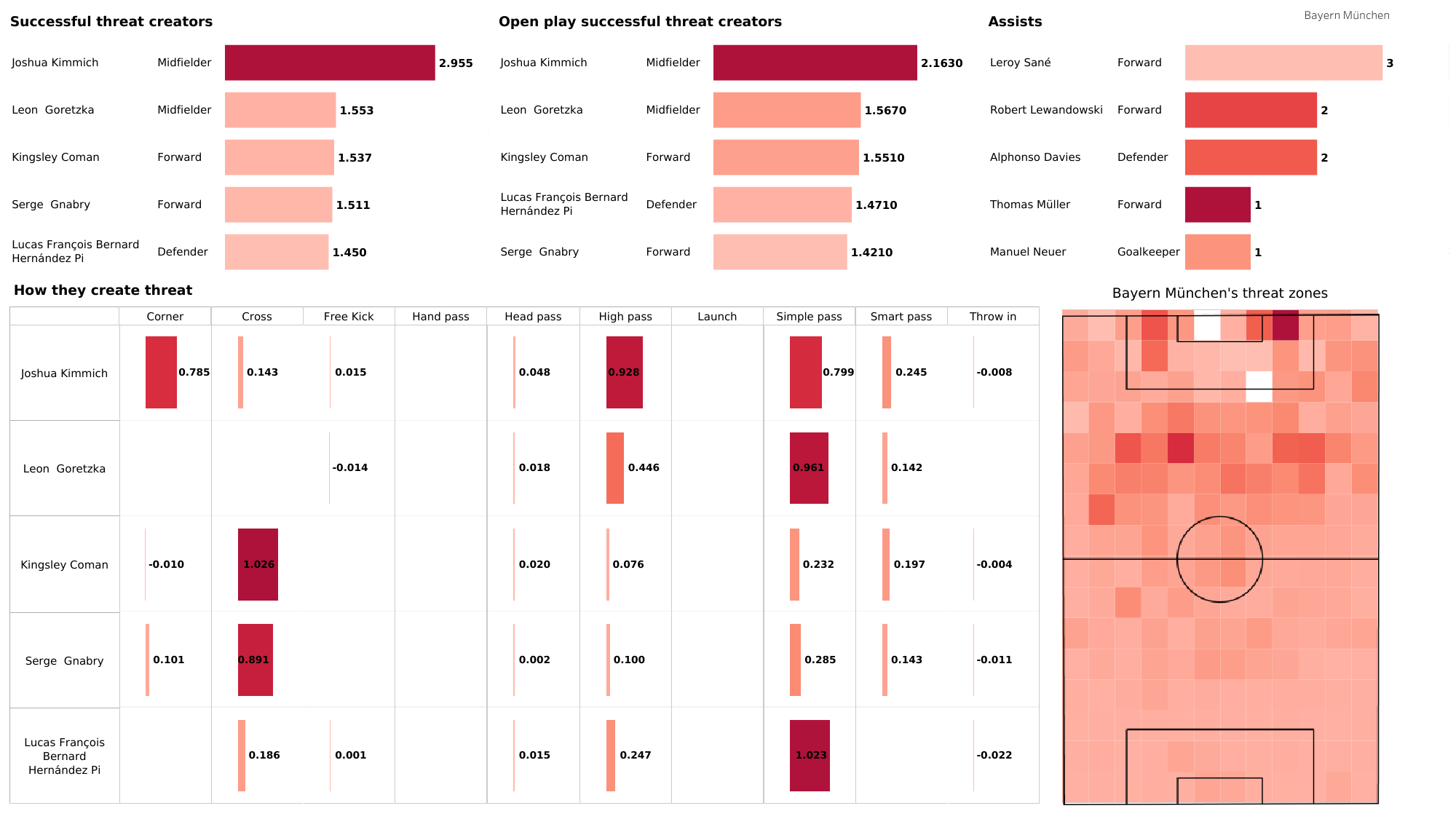 Joshua Kimmich has been the main threat creator for Bayern as he has generated the highest overall xT so far. Kimmich has generated an xT of 2.163 from open play and has the vision to spot the right pass in the final third. Bayern have been most threatening from the right flank, as seen in the above visual. Leroy Sane has provided three assists so far in the group stages and has been one of the best chance creators for the German giants.

RB Salzburg have hugely been considered as underdogs in the tournament and have the potential to produce an upset. Bayern will be looking to move on from the weekend defeat to Bochum and concentrate on moving to the next stages of the UEFA Champions League.