Ever since Robert Lewandowski announced publicly that he wants to leave Bayern Munich a few weeks back, the club have been preparing to replace the Polish marksman. The contract situation of Serge Gnabry has not yet been resolved by the Bayern hierarchy and the 26-year-old’s agent. Should both of them leave Bavaria this summer, Bayern would be left without two key men in the attack. There have been reports of Liverpool’s Sadio Mane joining the German giants, but it would still leave Die Roten without the strength in depth required to challenge on multiple fronts. One man who could be a useful addition to the attack is Chelsea’s Timo Werner. In this article, we will dissect whether Werner would be ideal for Bayern Munich. 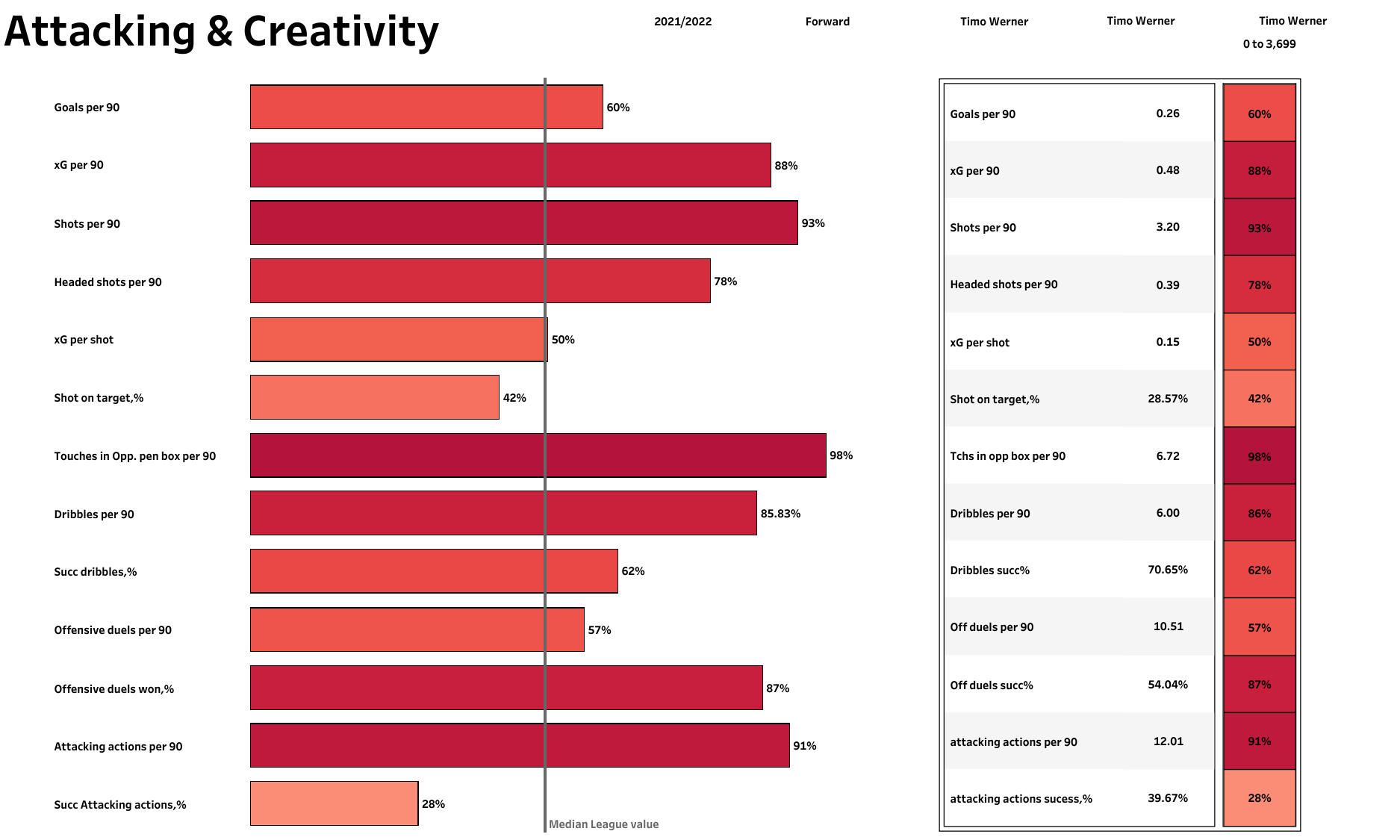 Werner featured in 21 games for Chelsea in the recently concluded 2021-22 Premier League season, playing only 1,283 minutes due to injuries, illness and inconsistency. In his limited game-time on the field, Werner scored four times and assisted once in the league, averaging a goal involvement every 256 minutes. However, his overall xG of 7.6 estimated that he should have scored at least twice what he did throughout the campaign. The 26-year-old fired off 3.2 shots per 90, putting him in the top 7% of forwards. But his shooting accuracy left a lot to be desired as he hit only 28.57% of his attempts on target. The German touched the ball 6.72 times per 90 in the opponents’ penalty box, which ranked him in the top 2% of forwards. He also attempted six dribbles per 90 at a respectable success rate of 70.65%. 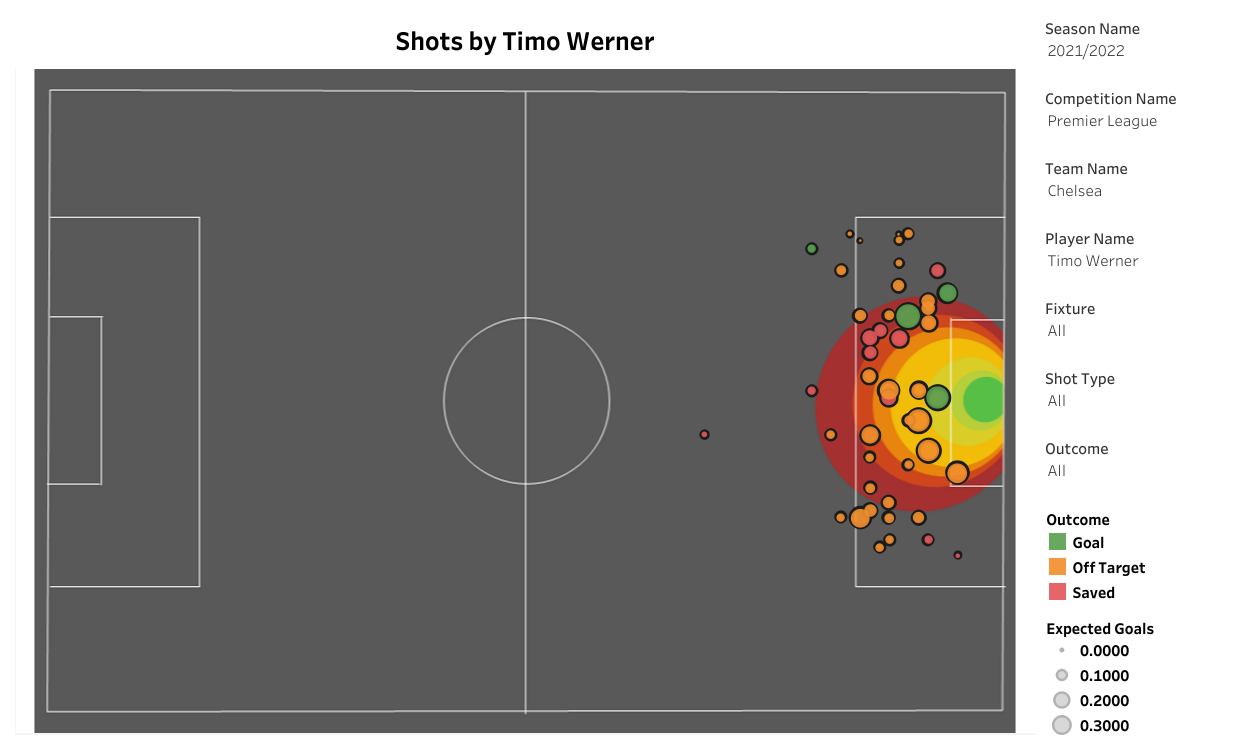 Werner’s finishing ability in the recent Premier League campaign for Chelsea speaks volumes in the shot map displayed above. The 26-year-old missed a lot of big chances close to the goal as he had a goal-per-90 ratio of only 0.26 compared to an xG per 90 of 0.48. Even though he took the overwhelming majority of his shots from inside the opposition’s penalty box, he mostly skied it over the crossbar or hit it wide of the post. In total, Werner attempted 45 shots but managed to muster only 16 on target and score four times, giving him a conversion rate of 11.25 shots per goal scored. 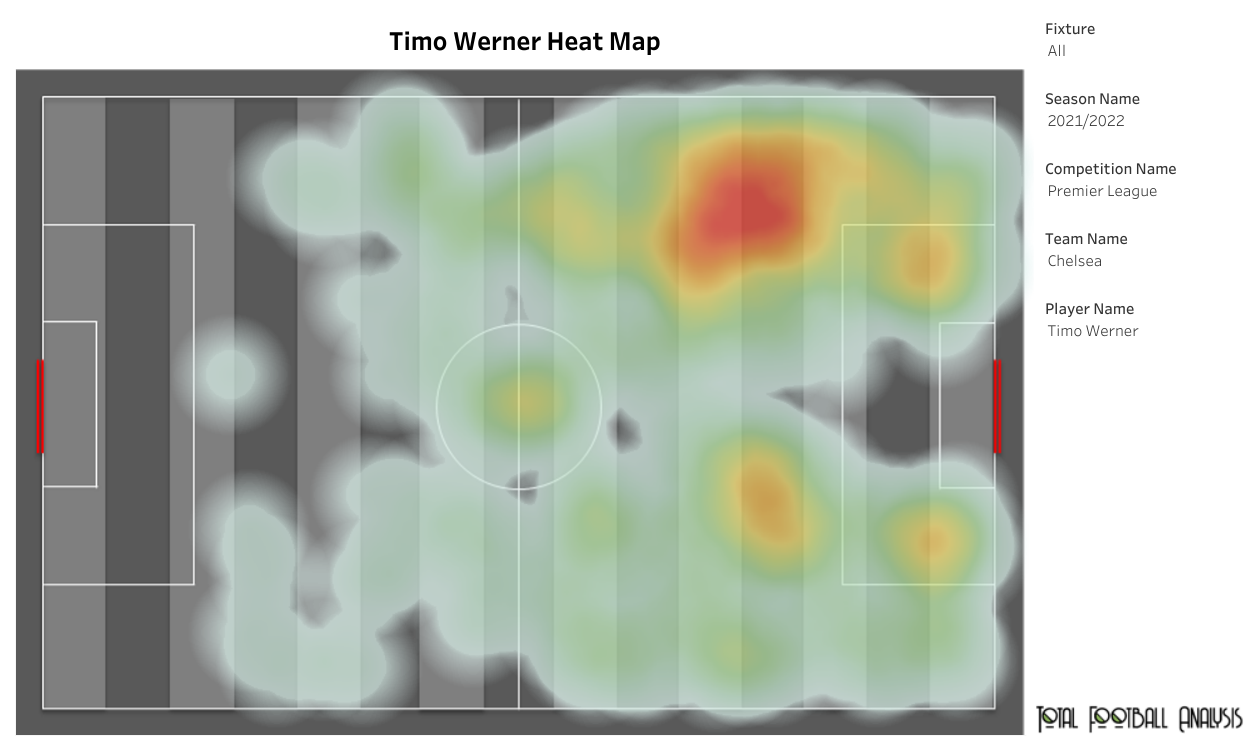 From the heat map shown above, we can see that Werner was involved largely on the left wing for Chelsea, drifting in from the wing towards the centre to shoot at goal. The German made himself available in advanced positions on the pitch, receiving 9.58 progressive passes per 90. He also contributed off the ball defensively, attempting 17.3 pressures per 90 and making 5.03 recoveries per 90.

Timo Werner has failed to set the world alight after his switch to Chelsea from RB Leipzig in July 2020. Should the German join the Bavarians, he would be better off taking the place of Serge Gnabry on the right wing instead of Robert Lewandowski up front.