Bayern Munich regained their six-point lead at the top of the Bundesliga with a comfortable 4-1 win over Hertha Berlin on Sunday. It was a routine performance from the league leaders, who signed off for the international break in the best way possible, dominating an opposition that looked helpless. Thomas Muller was once again on the scoresheet for Bayern as he continues his impressive form this season. He looked a bit rusty in the early minutes, but he eventually became a crucial creative outlet for the visitors. His intelligent movement allowed him to create multiple chances going forward.

Thomas Muller is having another exceptional season for Bayern Munich. He is accumulating more assists than anyone else in Europe’s top five leagues and is on his way to earning a record 11th Bundesliga title. With nine goals and 20 assists in all competitions so far this season, one can’t simply deny Muller’s impact. The World Cup winner looks like he will smash his previous record of 21 assists in the Bundesliga. Since 2008, when he made his Bayern senior debut, only Lionel Messi has provided more assists in Europe’s top five leagues. That is exceptional and just shows how much more credit the German deserves. 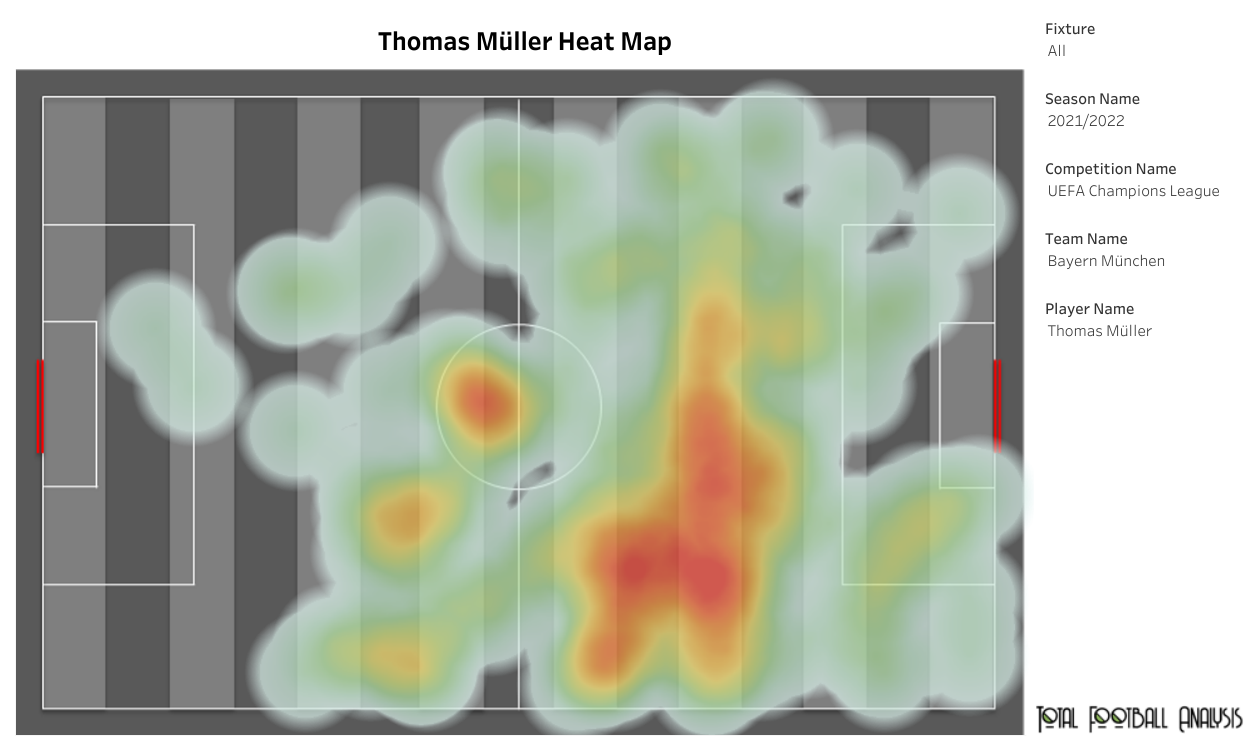 Muller can play in any attacking or midfield position, although he will rarely be seen in the areas expected of someone in the role he has been given. He generally starts as an attacking midfielder, but the German has more of a free role, as his heatmap indicates, and he tends to drift to wider positions most of the time. Müller is always on the lookout for spaces in the opposition’s shape that he might take advantage of. He’s the number 10 who goes beyond the forwards or drifts to the flank, and he’s the centre-forward, who selflessly withdraws to make room for a midfielder to run into. 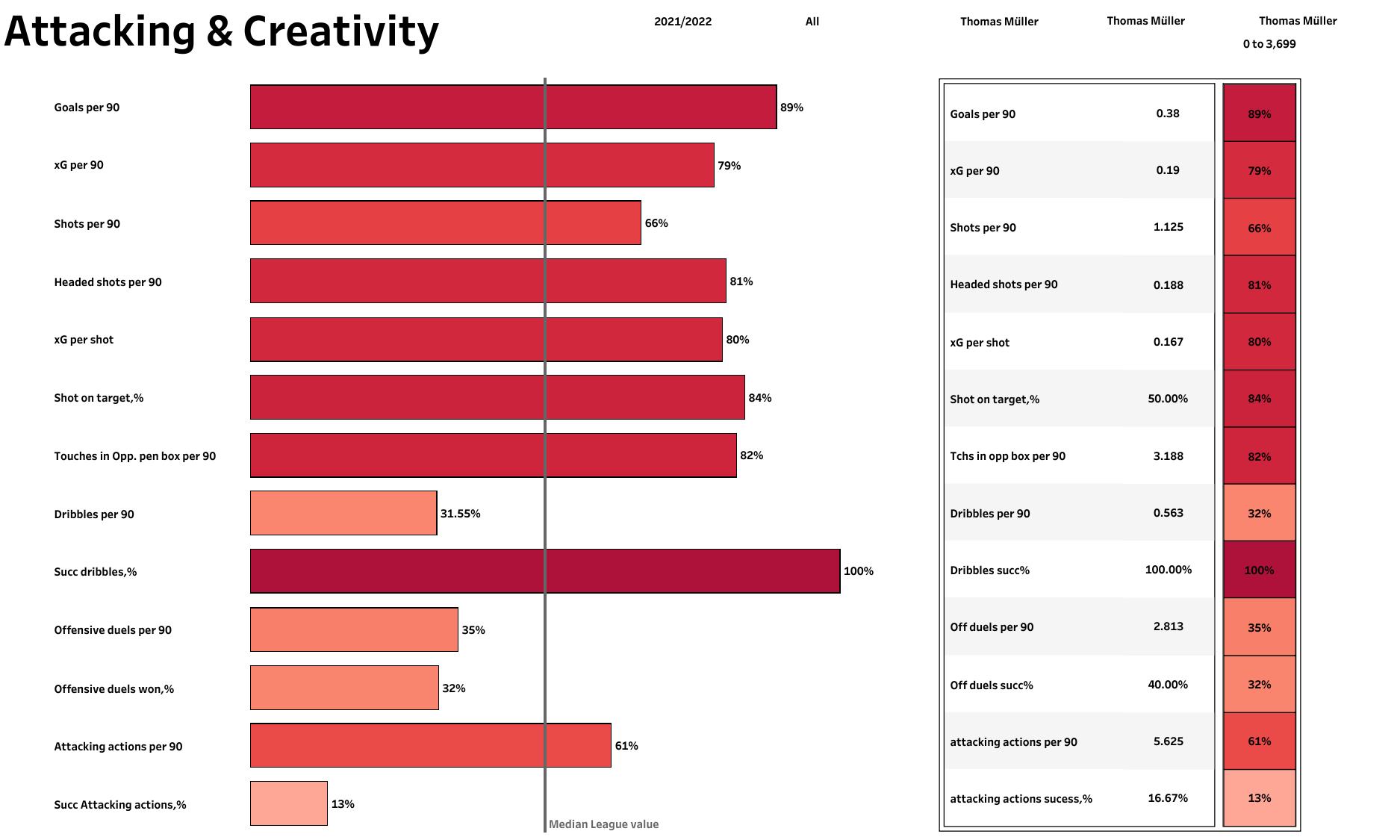 The above visual shows us the attacking and progression stats for Muller from the 2021-22 UEFA Champions League. Muller has recorded an xG of 0.19 per 90 minutes. He has had 50% of his shots on target and has taken 3.188 touches in the opposition penalty area. Muller is always on the move, and his tendency to drift into new and unexpected positions means opposing defenders have to be alert to monitor him. The moment his marker loses sight of him is the moment he strikes, by making a quick, penetrative burst into the penalty area. Muller is not a dribbler as the stats indicate and never has been, he prefers a swift one-two with a teammate to advance beyond his direct marker and into a position to threaten the goal. 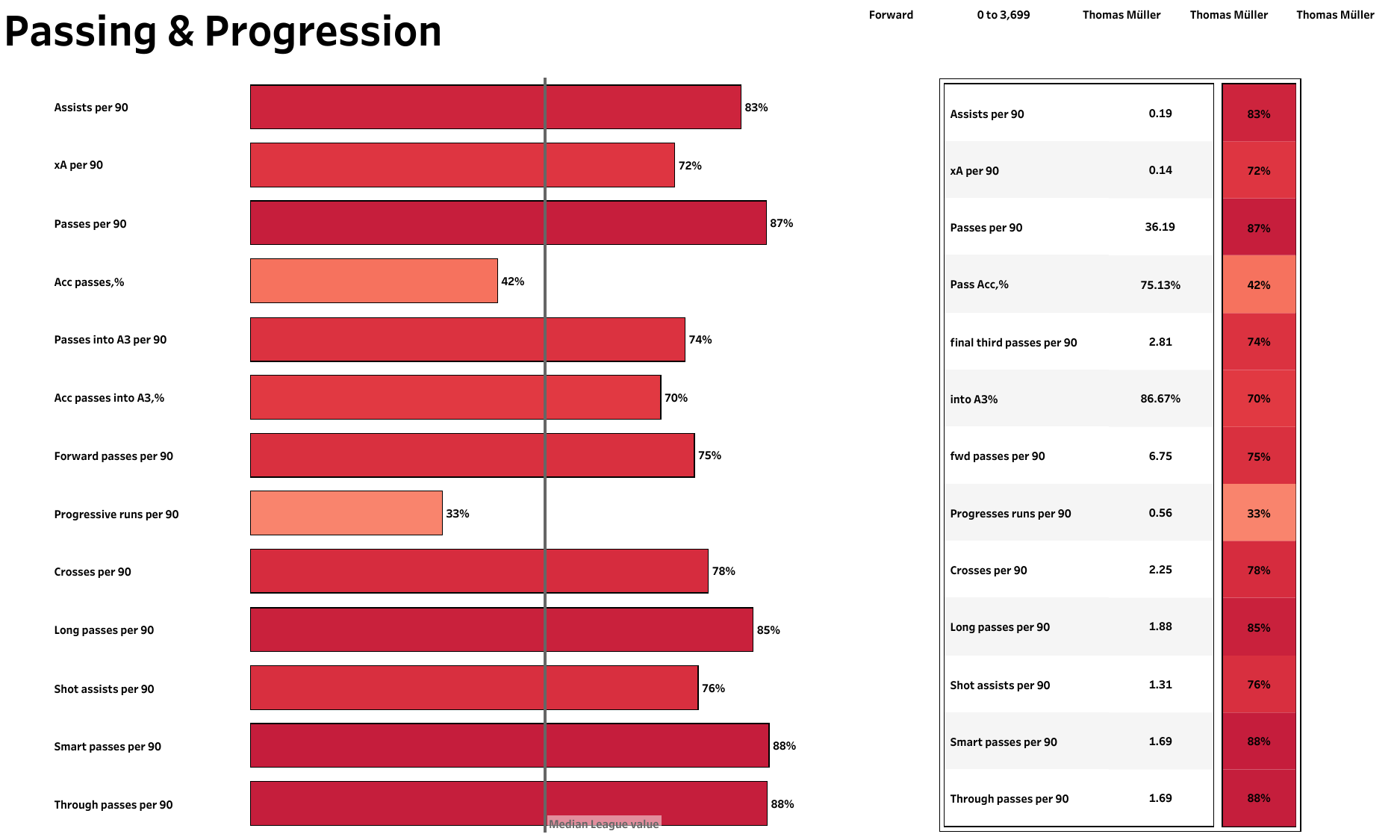 In the recent seasons, Muller has been more of a playmaker than a goal-scorer. He has recorded more assists than anyone in the Bundesliga and has been one of the top assist providers in the whole of Europe. His awareness is one of his greatest strengths and is what marks him out as one of the best attackers in the world, and he always knows where his teammates are and where they will try to make space. Muller has attempted 36.19 passes per 90 minutes with a pass accuracy of 75.13%. Most of his passes are in the final third as he attempted 6.75 passes forward passes per 90 minutes. He is also highly ranked for smart passes as well as through passes. 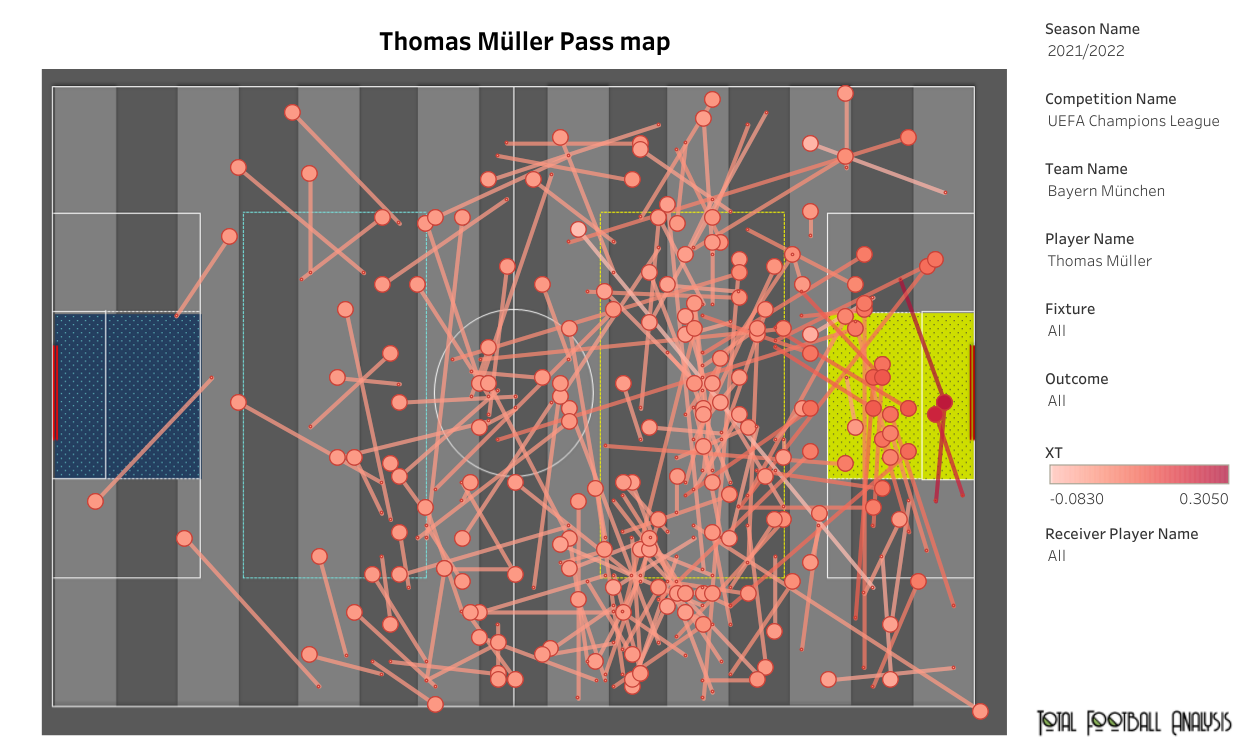 His pass map indicates how deep Muller can play whenever his team are trying to progress into the opposition’s half. He drops down near the halfway line to play short passes with his midfielders to create space. He has played most of his passes in the final third and has a very high xT from the crosses he has attempted from the right flank into the penalty area.

Thomas Muller has a total of 223 goals and 238 assists in his 610 appearances for Bayern Munich in all competitions, which indicates how crucial he is to their team. He has always been a player who has not received the credit he deserves for several years, but his performances speak otherwise. He is as important to the team as Robert Lewandowski or even Joshua Kimmich. Bayern Munich are once again strong contenders for the UEFA Champions League this season, and Thomas Muller will play a key role in their performances in the knockout stages of the tournament.