This summer at Bayern Munich, the focus has been on the contract situations and sagas of the superstar striker, Robert Lewandowski, and the dynamic winger, Serge Gnabry. However, an area where Bayern might need reinforcement, at least for the short term, might come in the heart of the defence. Niklas Sule has already confirmed his free transfer to rivals, Borussia Dortmund, and Tanguy Nianzou would benefit from a loan move away from the Allianz Arena. This would leave the Bavarians with only three centre-backs in the form of Lucas Hernandez, Dayot Upamecano and Benjamin Pavard. One man who would bring experience, if signed, is Villarreal’s Raul Albiol. Here, we will have a look at Albiol’s influence on the successful campaign that Villarreal had in the Champions League. 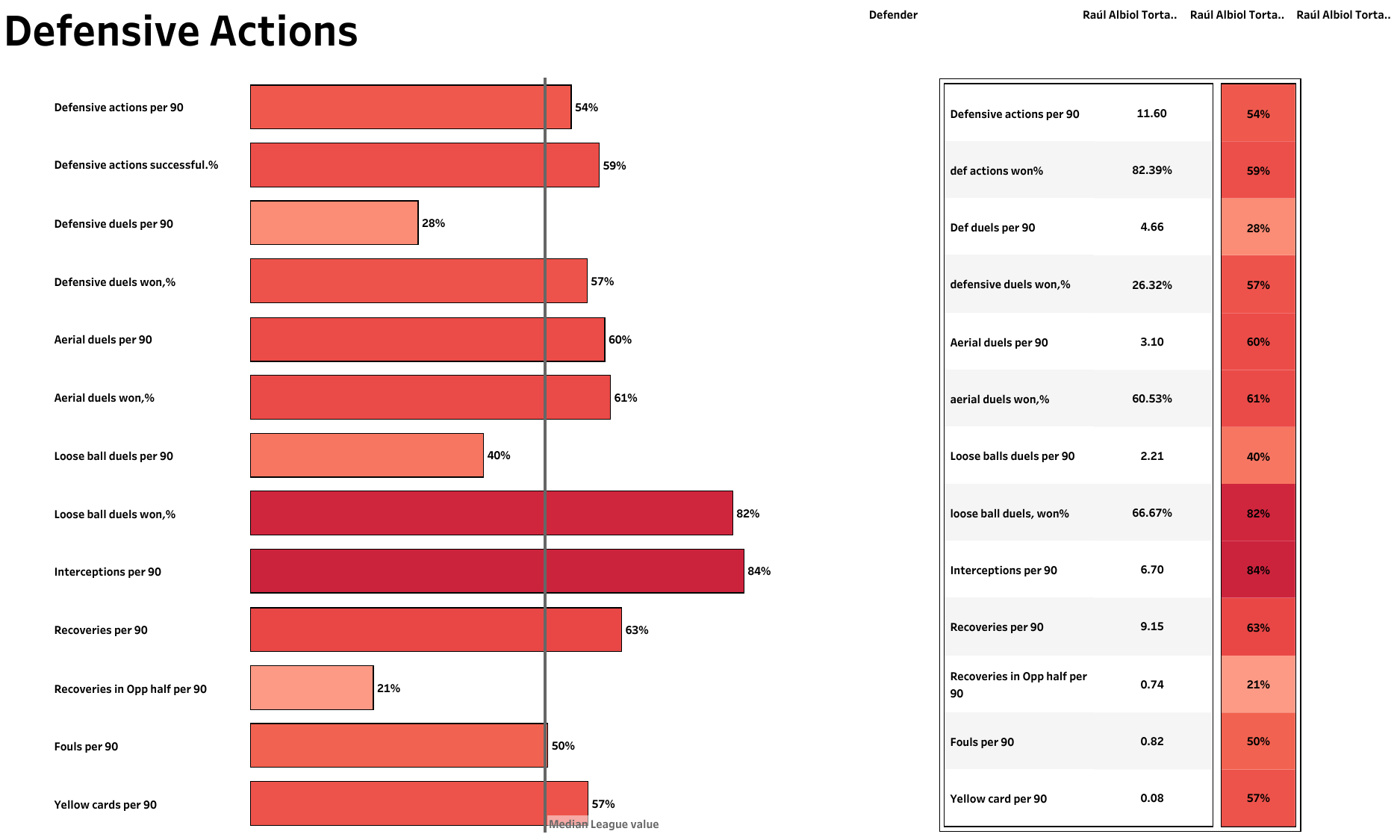 Albiol played in all of the 12 games that Villarreal played in this UEFA Champions League campaign. The 36-year-old put in some excellent defensive performances as the Yellow Submarines knocked out Juventus and Bayern Munich en route to the semi-finals. He had 11.6 defensive actions per 90 at a success rate of over 82%. The former Napoli man contested 3.1 aerial duels per 90 and won 60% of them. He attempted 2.21 loose ball duels per 90 and won two-thirds of them as well. His loose ball recovery rate put him in the upper quintile for defenders. 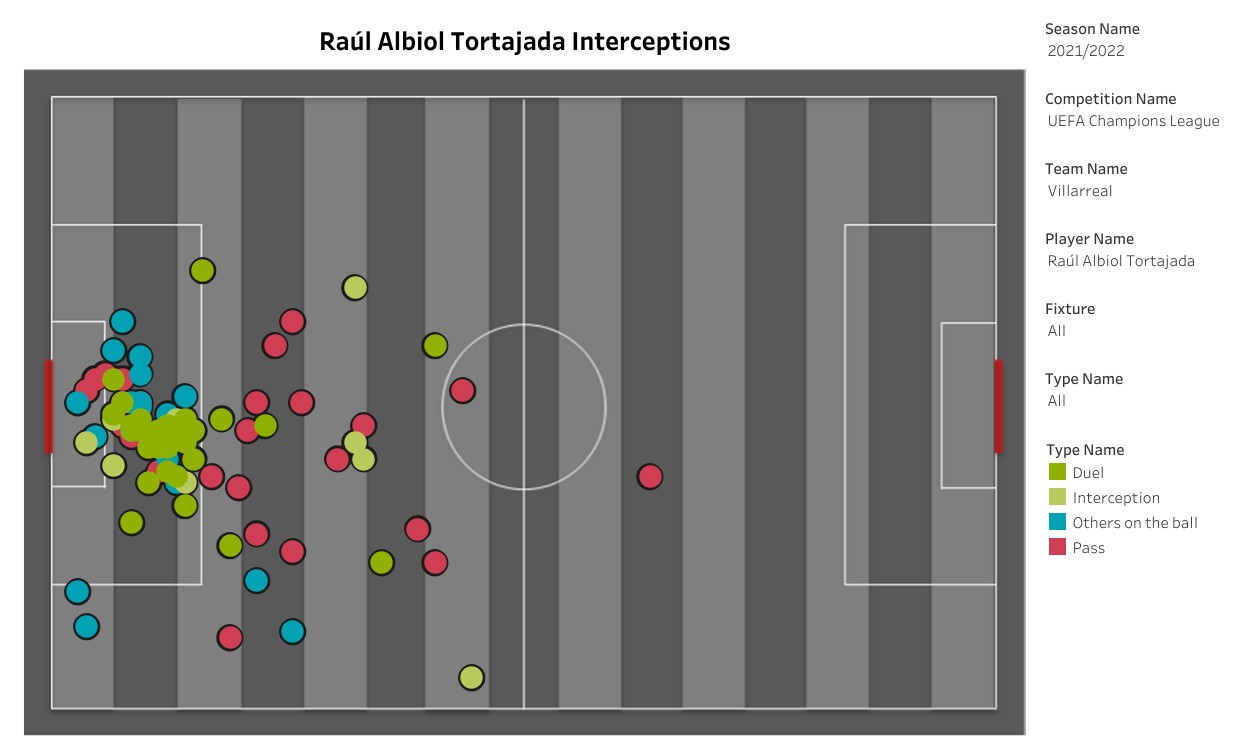 Given above are the locations of interceptions made by Albiol for Villarreal in the recently concluded UEFA Champions League season. The 36-year-old made 6.7 interceptions per 90, ranking him in the 84th percentile for defenders in this category. Most of these interceptions came inside his penalty box in the form of duels. In the opposition’s half, he made only one interception, showing that he prefers to stay back to avert danger. 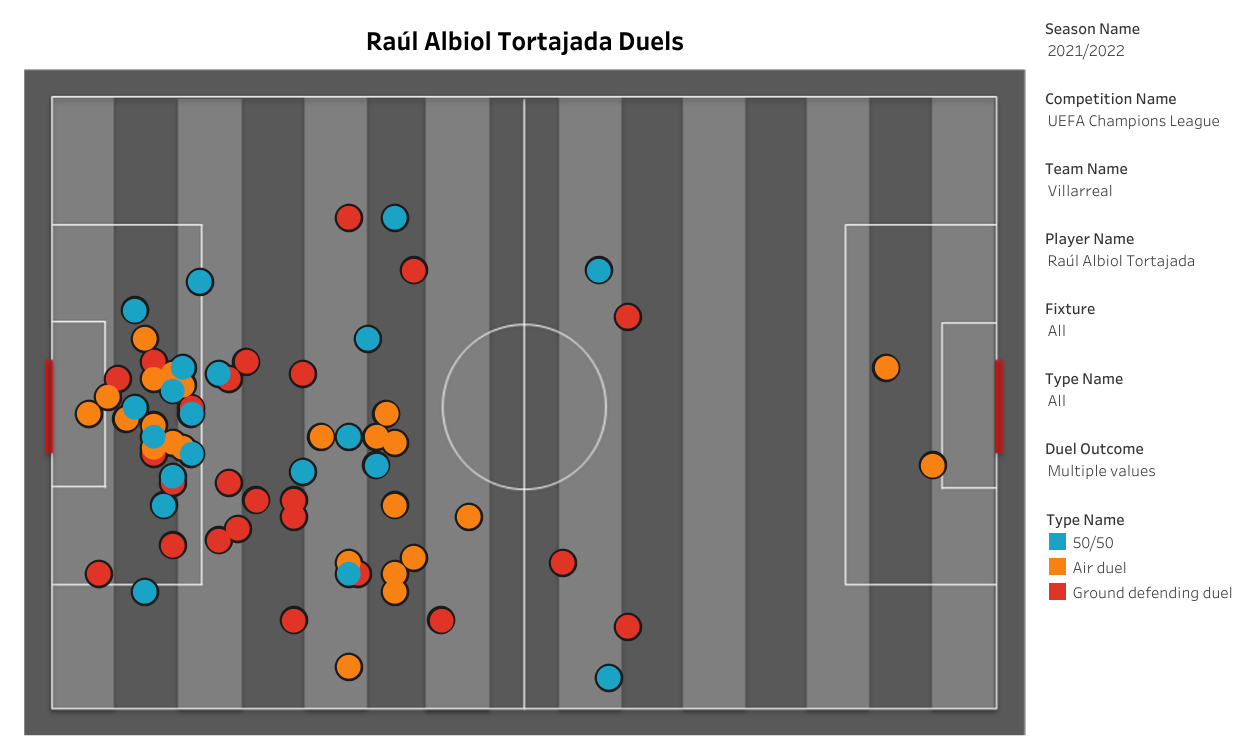 Displayed above are the locations of the winning duels made by Albiol for Villarreal in the UEFA Champions League campaign just gone by. The veteran centre-back won a good mixture of 50/50s, aerial duels and ground duels. Most of the 50/50s that he won came from inside his penalty area. The former Real Madrid man managed to win two aerial duels in the opposition’s penalty area, mainly from set-pieces.

Raul Albiol would be a valuable addition to Bayern Munich’s youthful backline as the German Champions look to bounce back from the disappointing UCL campaign next season.