When Bayern Munich signed Lucas Hernandez from Atletico Madrid in the summer of 2019 for a reported fee of €80 million, it raised more than a few eyebrows as it was a club record fee, a Bundesliga record fee and for a very brief period, the second most expensive centre-back. Despite a slow start in the initial few months, he has gone on to cement himself in Die Roten’s starting XI. His versatility allows him to play as a central defender as well as fill in at left-back in Alphonso Davies’ absence. 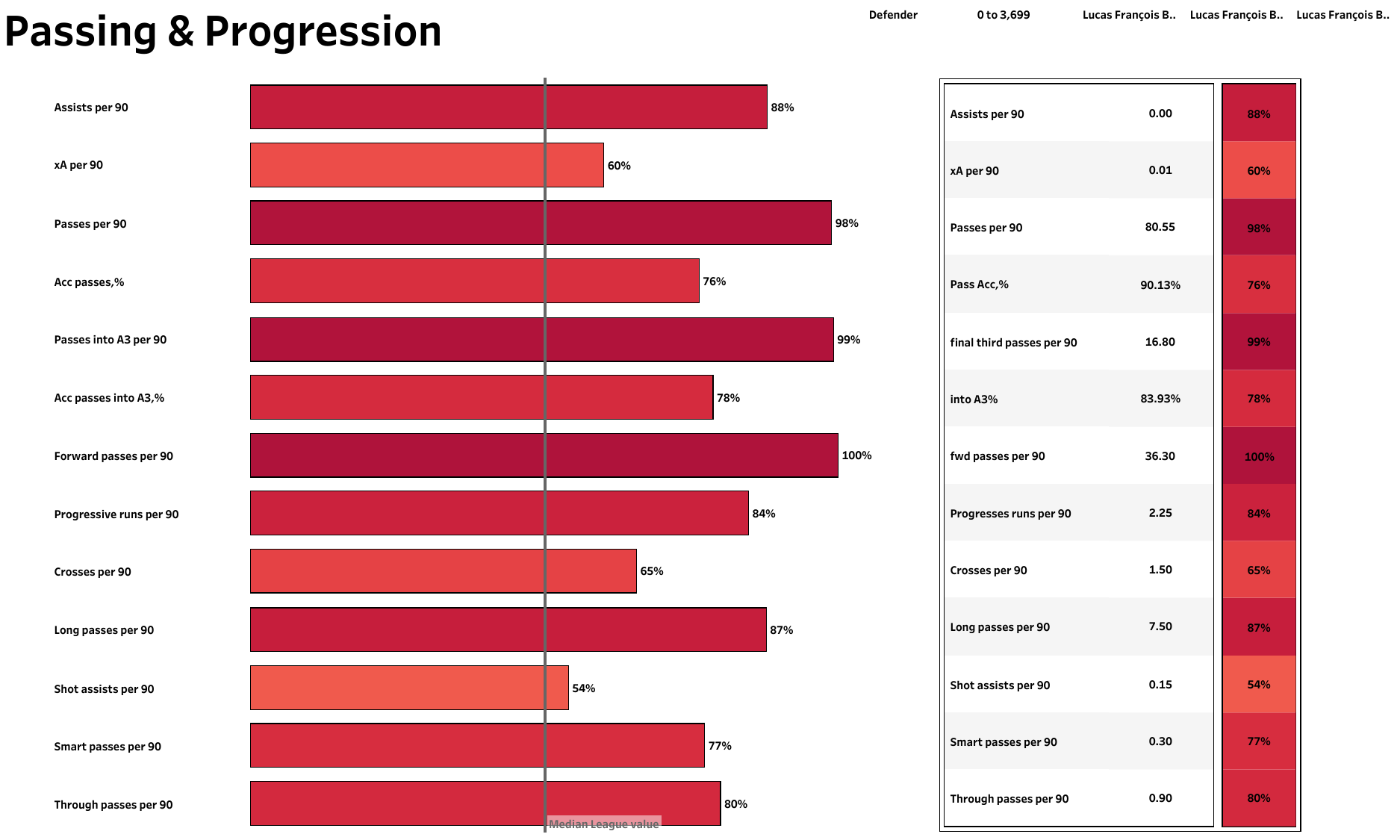 Hernandez made 34 appearances for Bayern Munich last season across all competitions, which included eight in the UEFA Champions League. He was a regular participant in Bayern’s build-up, completing an astonishing 72 passes per 90 out of 80 attempts. The Frenchman was also great at progressing the ball, attempting nearly 17 passes into the final third per 90 and completing 84% of them. With 2.25 progressive runs per 90 and 7.5 long balls per 90, he was placed in the upper quintile among defenders of both categories. 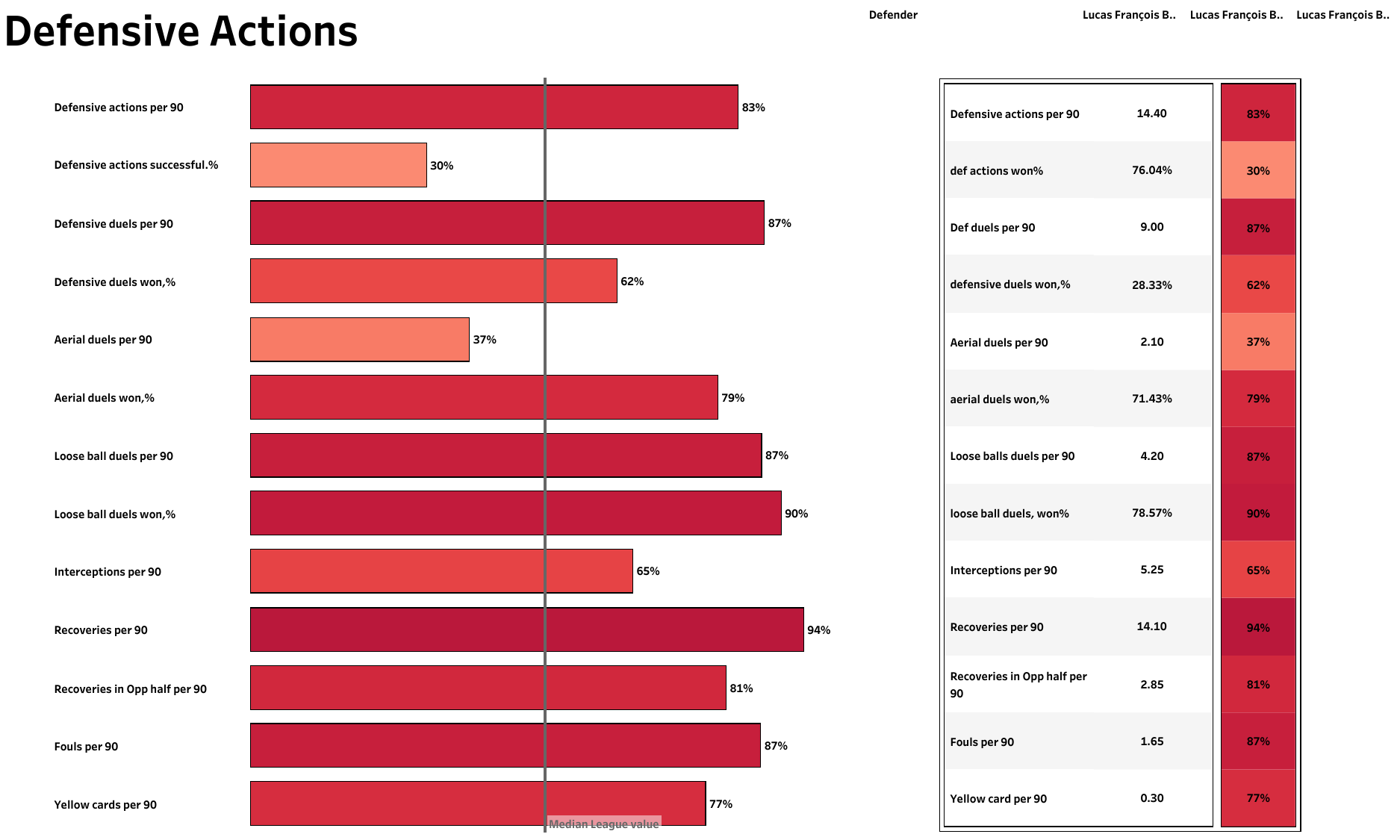 Hernandez put up more than 14 defensive actions per 90 and came out successful in over 76% of them. He attempted nine defensive duels per 90, winning 28.3% of them. Standing at 184 cm, he won 71.43% of the aerial duels he contested, though he only contested 2.1 per 90. The Frenchman successfully recovered 78.57% of the 4.2 loose ball duels per 90 he competed, the former ranking him in the upper decile for defenders. With 5.25 interceptions per 90 and 14.1 recoveries per 90, he was ready to sniff the danger out. However, his reckless temperament saw him commit 1.65 fouls per 90. 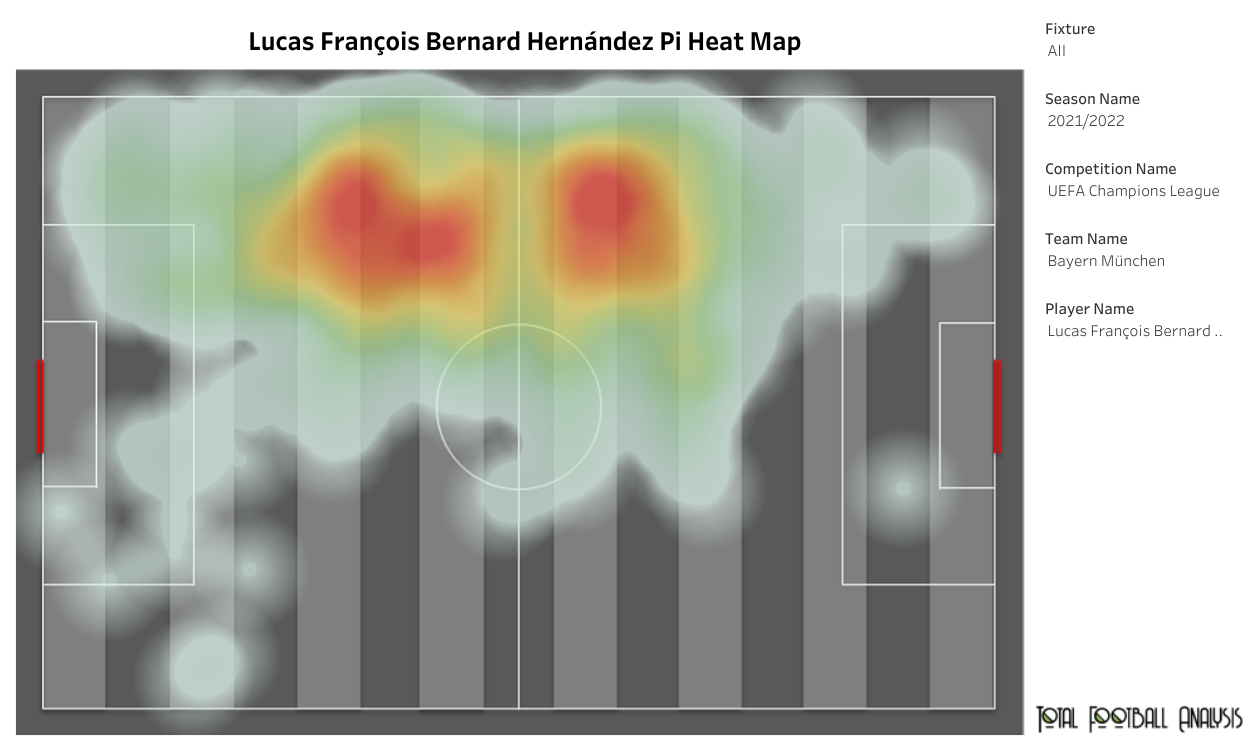 Hernandez was a very proactive defender, moving out of his line to thwart dangerous situations before they reach the defensive third. He started one game at left-back and in the remaining games, he played at the heart of the defence. When playing as the latter, he provided cover for the advancing left-back. With the ball at his feet, the Frenchman completed 8.41 progressive passes per 90, 11.7 passes into the final third per 90 and 10.6 progressive carries per 90. 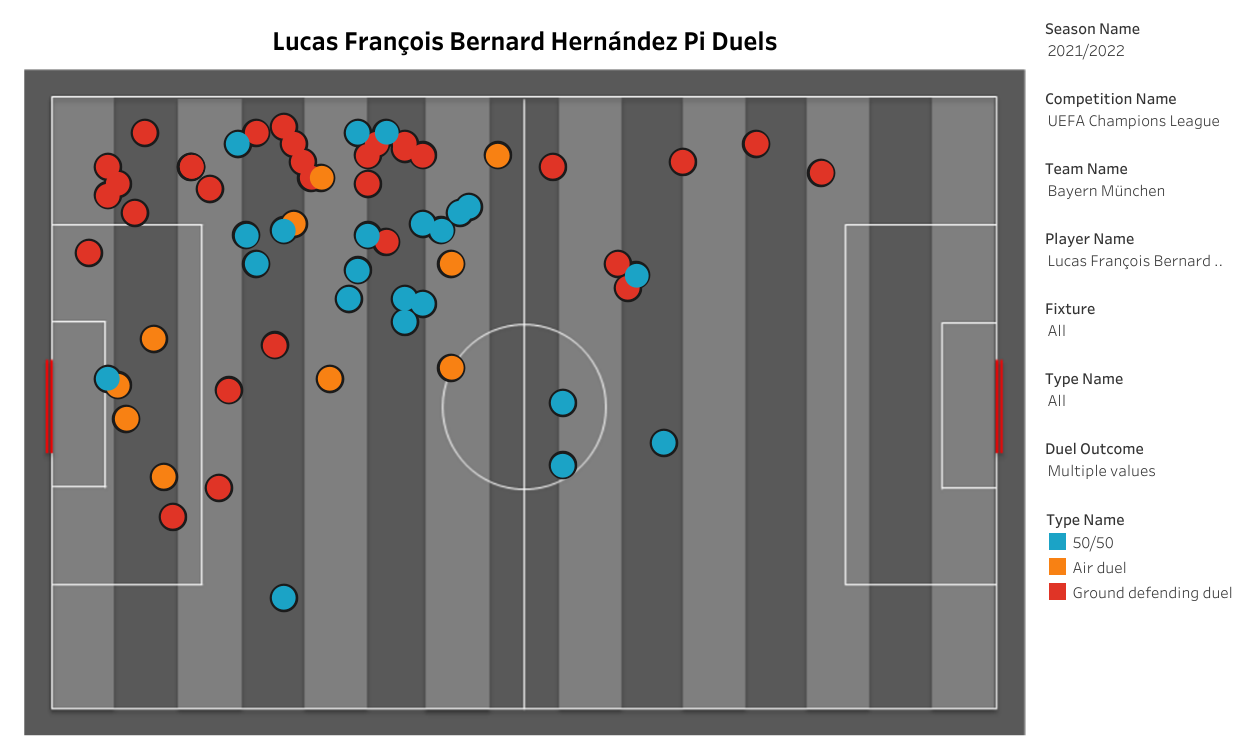 Hernandez won most of his duels on the left-hand side of the pitch, be that at left centre-back or left-back. The majority of these victorious duels came in the form of ground-based defending duels and 50/50s as he competed in fewer aerial duels despite winning a high percentage of them. He attempted 14 pressures per 90, 5.56 tackles & interceptions per 90, 3.17 clearances per 90 and 1.9 blocks per 90.

Lucas Hernandez has evolved into one of the key men in Bayern Munich’s backline despite a slow start to his tenure at the Allianz Arena. He has since been ever-present in the Bayern backline, clocking at least 2,000 minutes in all competitions for two seasons running. And that is due to his versatility and ability to adapt.