Bayern Munich have had a busy summer transfer window so far. They have signed Sadio Mane from Liverpool, Noussair Mazraoui and Ryan Gravenberch from Ajax, and most impressively, Matthijs de Ligt from Juventus. However, they had to let go of their talisman, Robert Lewandowski, to Barcelona for just €45 million after the Pole declared his intention to leave the club. Their other outgoings included Marc Roca, Omar Richards, Niklas Sule, Corentin Tolisso and Malik Tillman. While the summer transfer window business was being conducted, Leon Goretzka suffered a knee injury that will require surgery. He is expected to be out for at least two months. 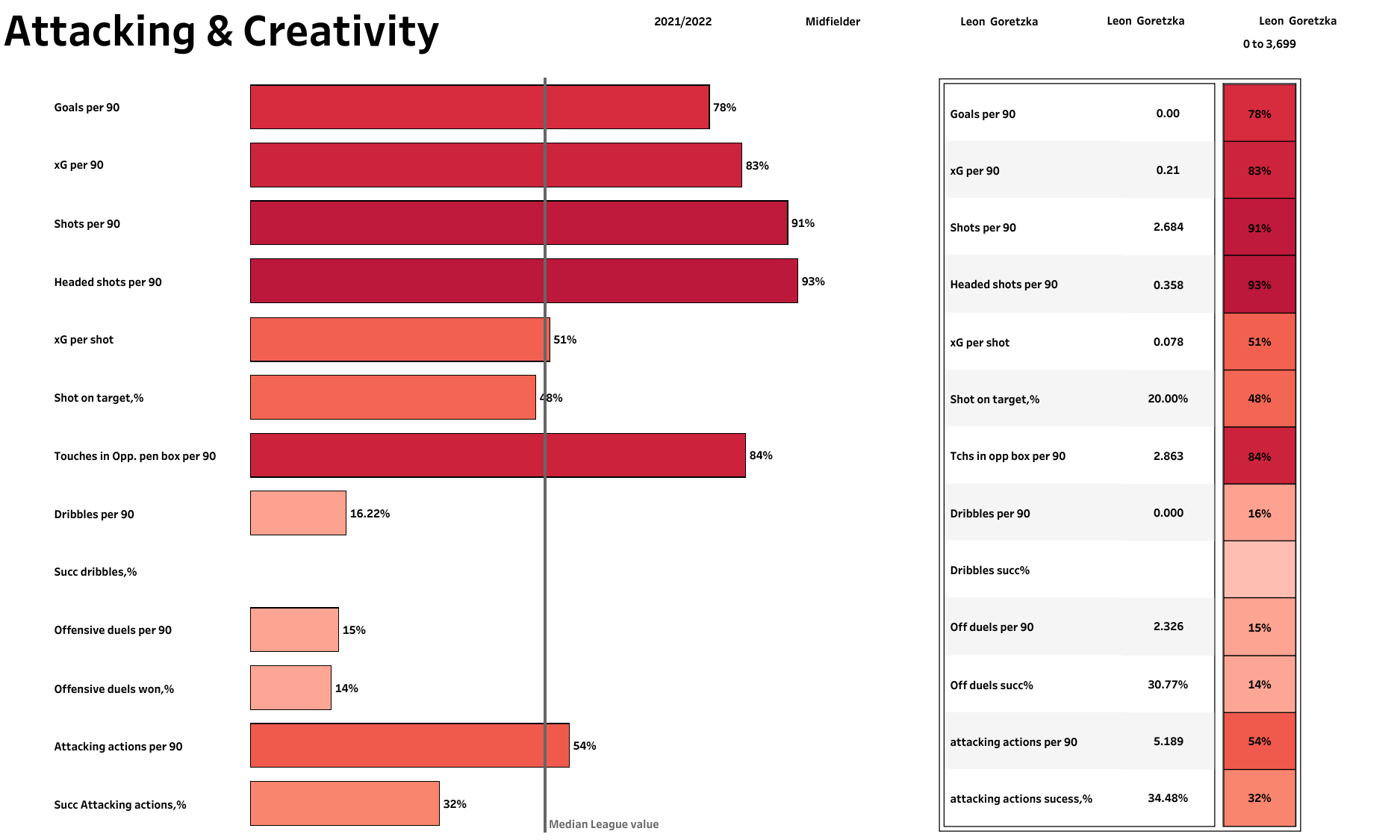 Goretzka made 27 appearances for Bayern Munich last season in all competitions, including six in the UEFA Champions League. He did not score a goal or provide an assist in his 468 minutes played in the competition but generated an xG of 0.21 per 90, high enough for the upper quintile. The former Schalke man fired off 2.68 shots per 90, putting him in the top 9% among midfielders. His 0.358 headed shots per 90 placed him in the 93rd percentile. Additionally, he registered 2.86 touches in the opponents’ penalty box per 90.

Goretzka may not have made an assist, but he generated an xA per 90 value of 0.17, placing him in the top 15% among midfielders. He completed an average of 53 passes per 90 out of 60 attempts. He played more than 10.7 passes into the final third per 90 at 83.3% accuracy. The German midfielder completed 4.12 long balls per 90 and 1.07 shot assists per 90, the latter of which put him in the upper quartile. He also completed 1.61 smart passes per 90 and 1.79 through balls per 90, placing him in the top quintile in both categories. 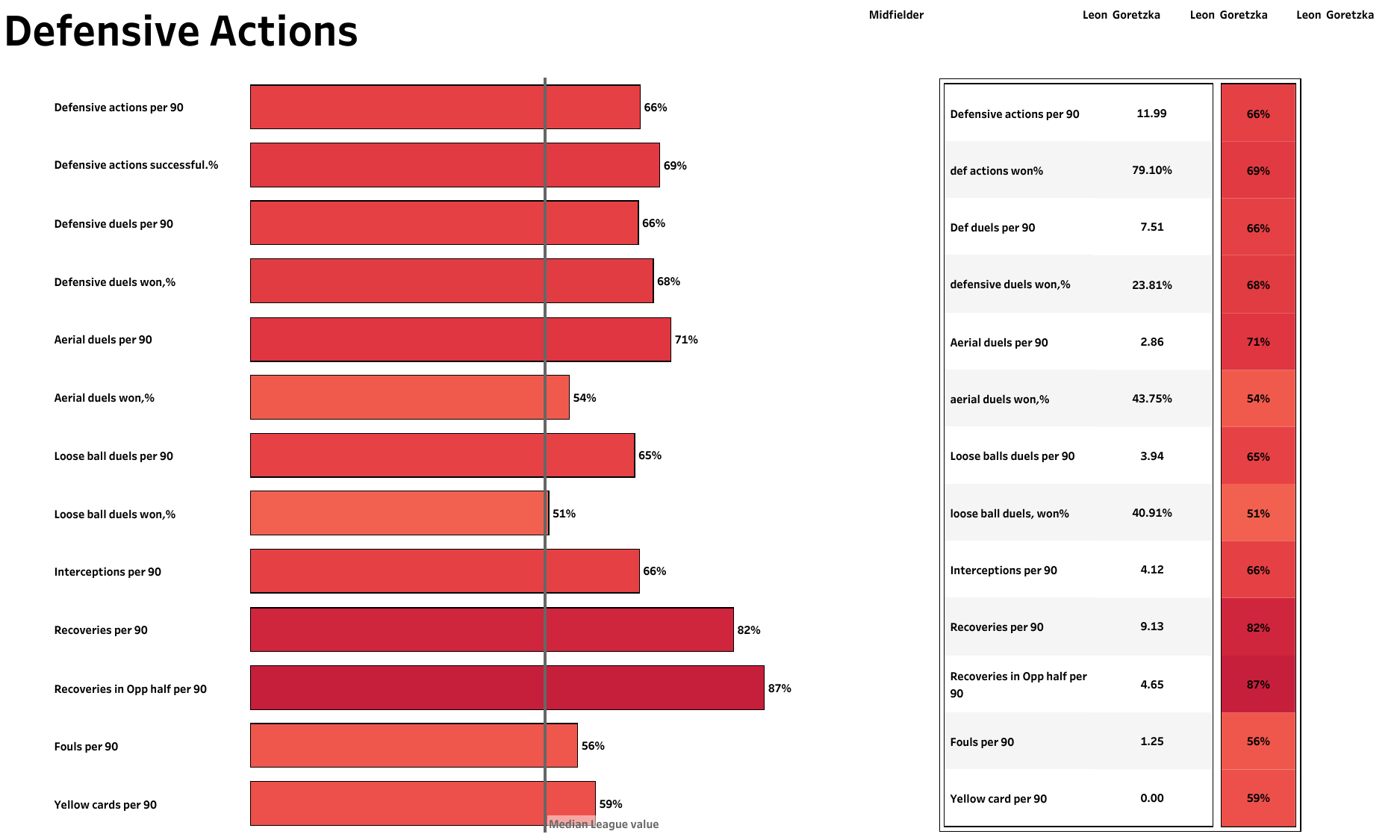 Goretzka attempted 12 defensive actions per 90, winning 79.1% of them. He also took part in 7.5 defensive actions per 90 and 2.86 aerial duels per 90. Despite standing at 189 cm, he won only 43.75% of his aerial duels. Still, he was placed above the median for midfielders in the aerial battle win rate. He recovered 41% of his four contested loose ball duels per 90. The former Schalke man showed his ability to press high up the pitch as he made 4.65 recoveries per 90 in the opposition’s half. 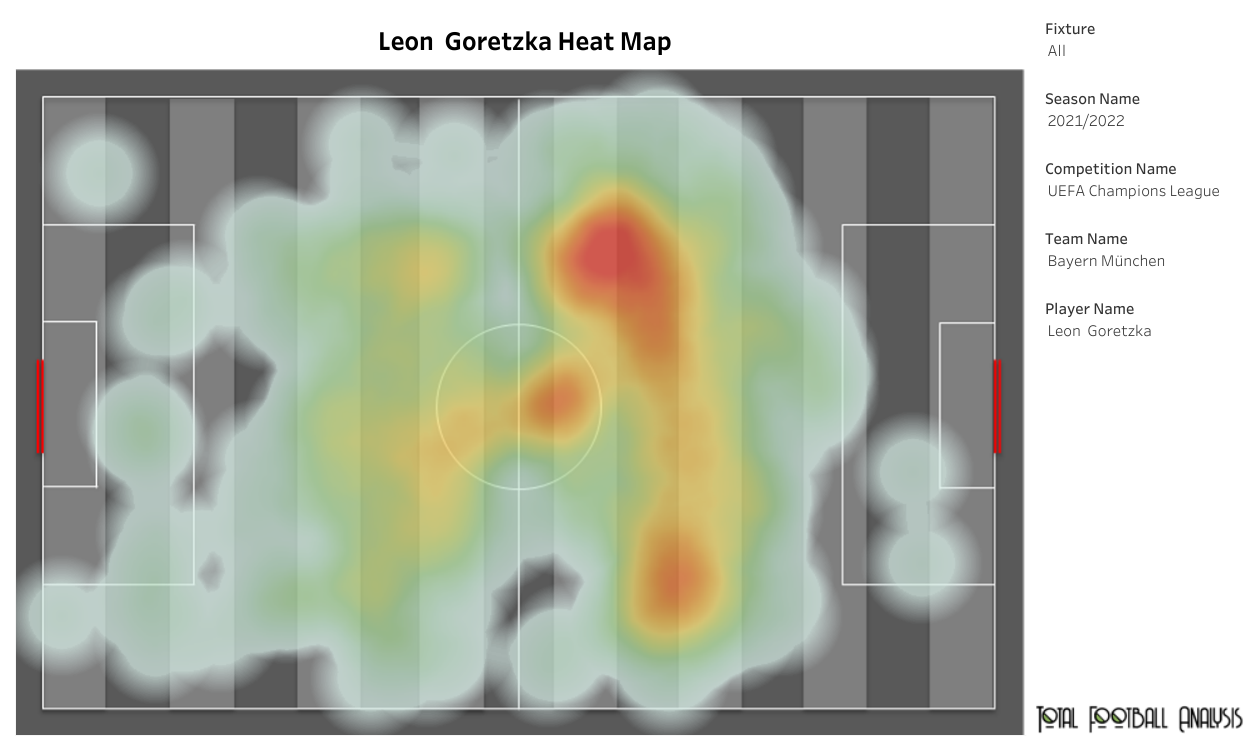 As a proper box-to-box midfielder, Goretzka ran up and down the pitch, though he mostly spent time on the left-hand side of the double pivot in midfield. Because Bayern spent most of their time on the ball in the opponent’s third, he was more active in the opposition’s half. He completed 6.92 progressive passes per 90, 6.73 passes into the final third per 90, 2.5 passes into the attacking penalty area per 90, 6.54 progressive carries per 90 and 2.88 carries into the attacking third per 90. Defensively, he attempted 17.5 pressures per 90 (of which 5.96 were successful), 3.65 tackles & interceptions per 90 and 1.35 blocks per 90.

As you can see, Leon Goretzka brings a lot to Bayern Munich on the pitch and is easily their second-best midfielder in the squad, behind only Kimmich. While Goretzka’s injury is certainly bad for the team, Ryan Gravenberch could possibly mitigate this in the opening weeks of the season.