Ever since Robert Lewandowski’s announcement of wanting to leave Bayern Munich became public, the German Champions have been on a hunt to bring in a centre-forward to prepare for the inevitable departure of the Polish marksman. Though the Bavarians have officially signed Sadio Mane from Liverpool ahead of the new season, the Senegalese is not a pure centre-forward and may even end up replacing Serge Gnabry, should the German winger also leave the club. This is where Inter Milan’s Lautaro Martínez comes into the picture and might make a difference at the Allianz Arena. 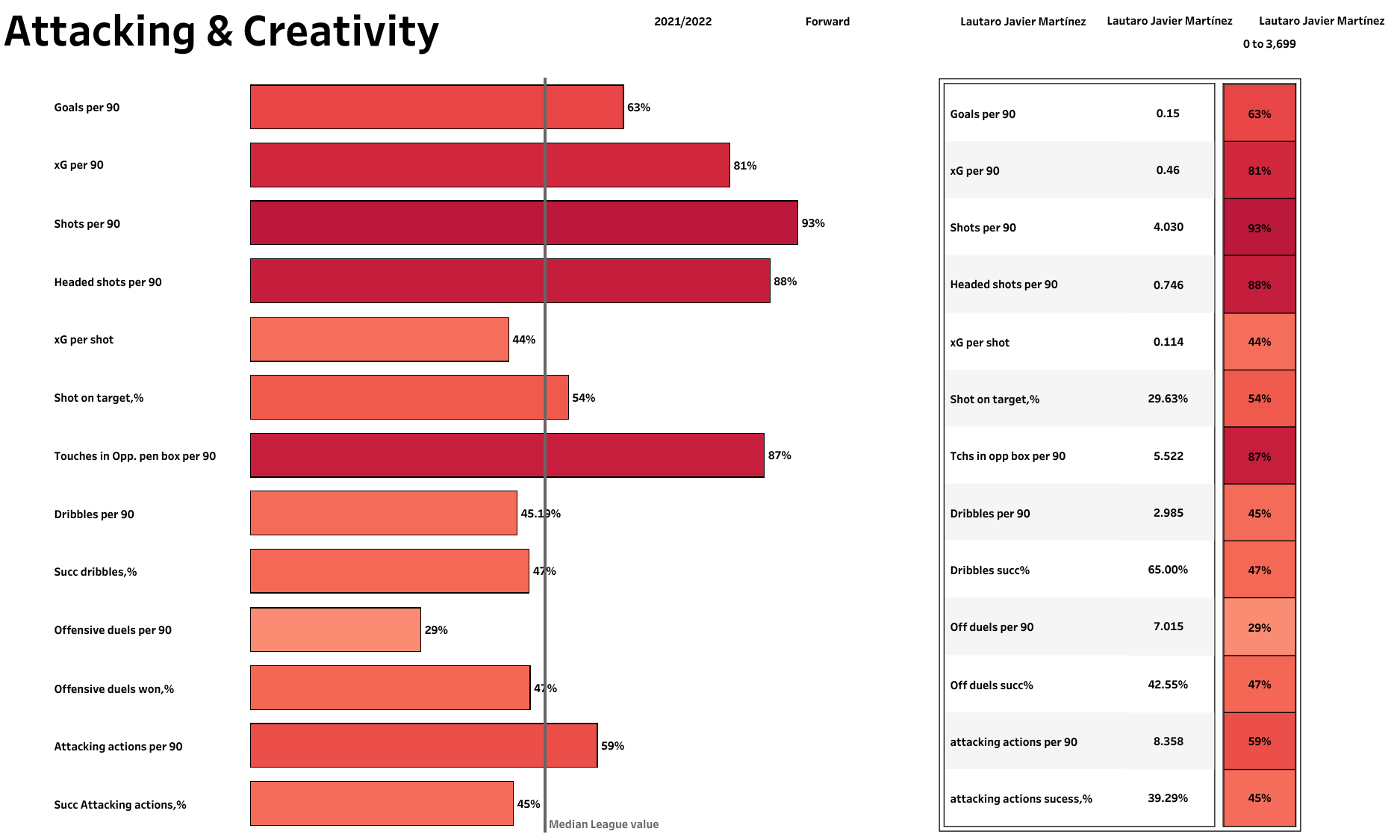 Martínez played in all eight games for Inter Milan last season in the UEFA Champions League, being on the pitch for 580 minutes. Though the Argentine generated 0.46 xG per 90, he could actually score at the rate of only 0.15 per 90, almost one-third the level of xG. The Bahia Blanca-born striker attempted just over four shots per 90, putting him in the top 7% of forwards. Despite standing at just 174 cm, Martinez ranked in the 88th percentile among forwards for headed shots per 90, with 0.75 per 90 to his name. The 24-year-old also recorded over 5.5 touches in the opponents’ penalty area per 90, which put him in the upper quintile for forwards. 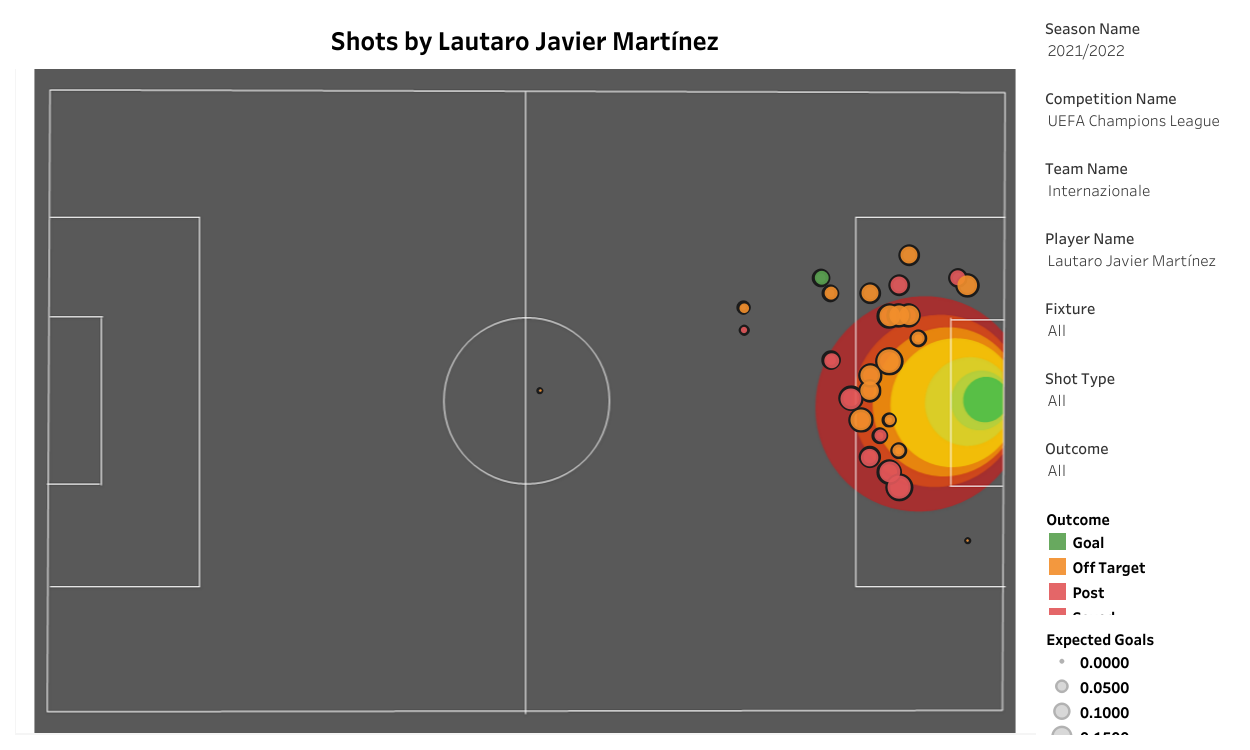 Martínez’s underperformance in front of the goal as per xG can be seen in the above shot map, as he missed at least two or three big chances which had a high xG value. The Argentine’s shot accuracy in the Champions League was a lowly 25%, and his only goal in the competition came from outside the box. Martínez attempted 28 shots for the Nerazzurri but only managed to hit seven of them on target, and his average shot distance from goal was 14.7 yards. 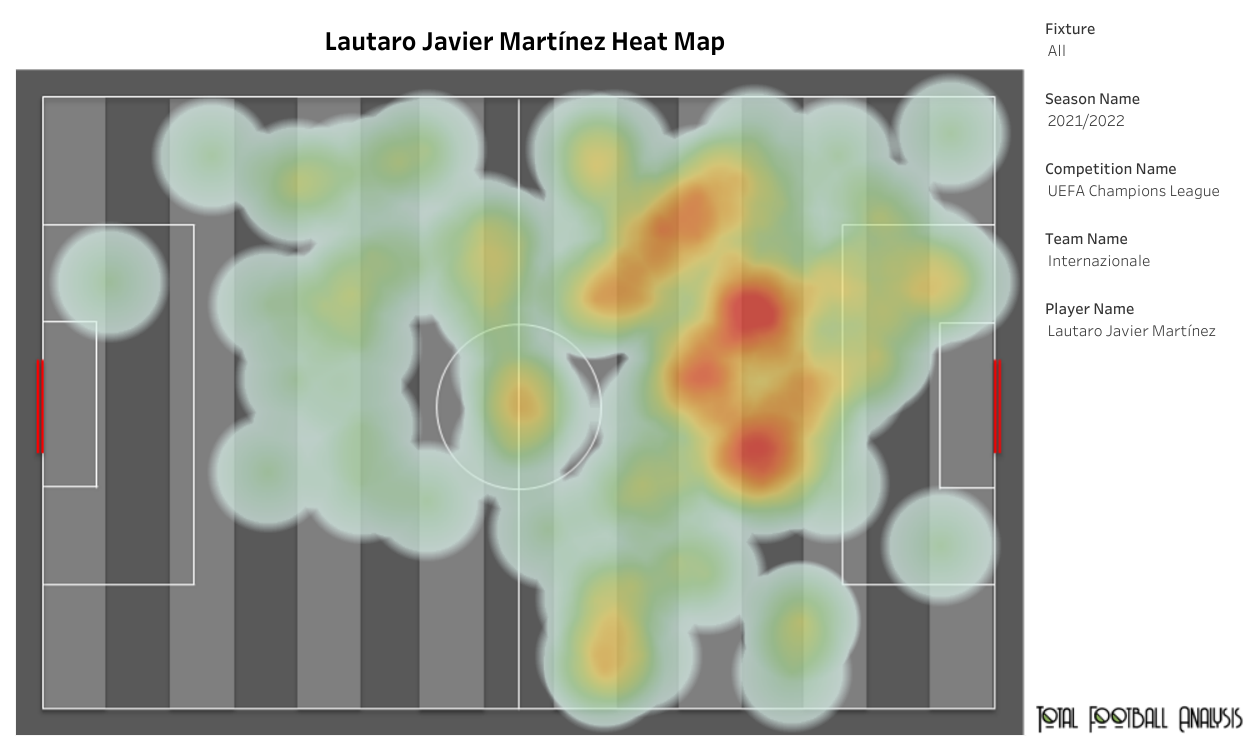 As shown in the above heat map, Martínez was most active for Inter Milan in the final third. The Argentine made himself available in advanced positions quite frequently, as he received 8.75 progressive passes per 90. The former Racing club striker worked fairly hard off the ball, attempting 15.3 pressures per 90, of which 4.84 were successful. He also made 1.88 tackles and interceptions per 90. The 24-year-old made 3.26 shot-creating actions per 90 as well.

Lautaro Martínez may have underachieved in Europe for Inter Milan in the recent campaign but in the Serie A, he outperformed his xG, as the Nerazzurri challenged their crosstown rivals, AC Milan, for the Scudetto until the last matchday of the season. Inter may not entertain offers for the Argentine striker, who will turn 25 this August, and may demand at least €100 million, which Bayern are unlikely to pay.