So far, Bayern Munich have had a hectic summer transfer season. This is especially the case in the midfield department. They have released Corentin Tolisso (who has subsequently re-joined Olympique Lyonnais), sold Marc Roca to Leeds United and loaned out Malik Tillman to Scottish giants, Rangers. As far as the incomings are concerned, there is only one – Ryan Gravenberch from Ajax. However, Die Roten might not be done yet, as various reports in Germany claim that the club is interested in bringing in the Austrian midfielder, Konrad Laimer, from rivals RB Leipzig. 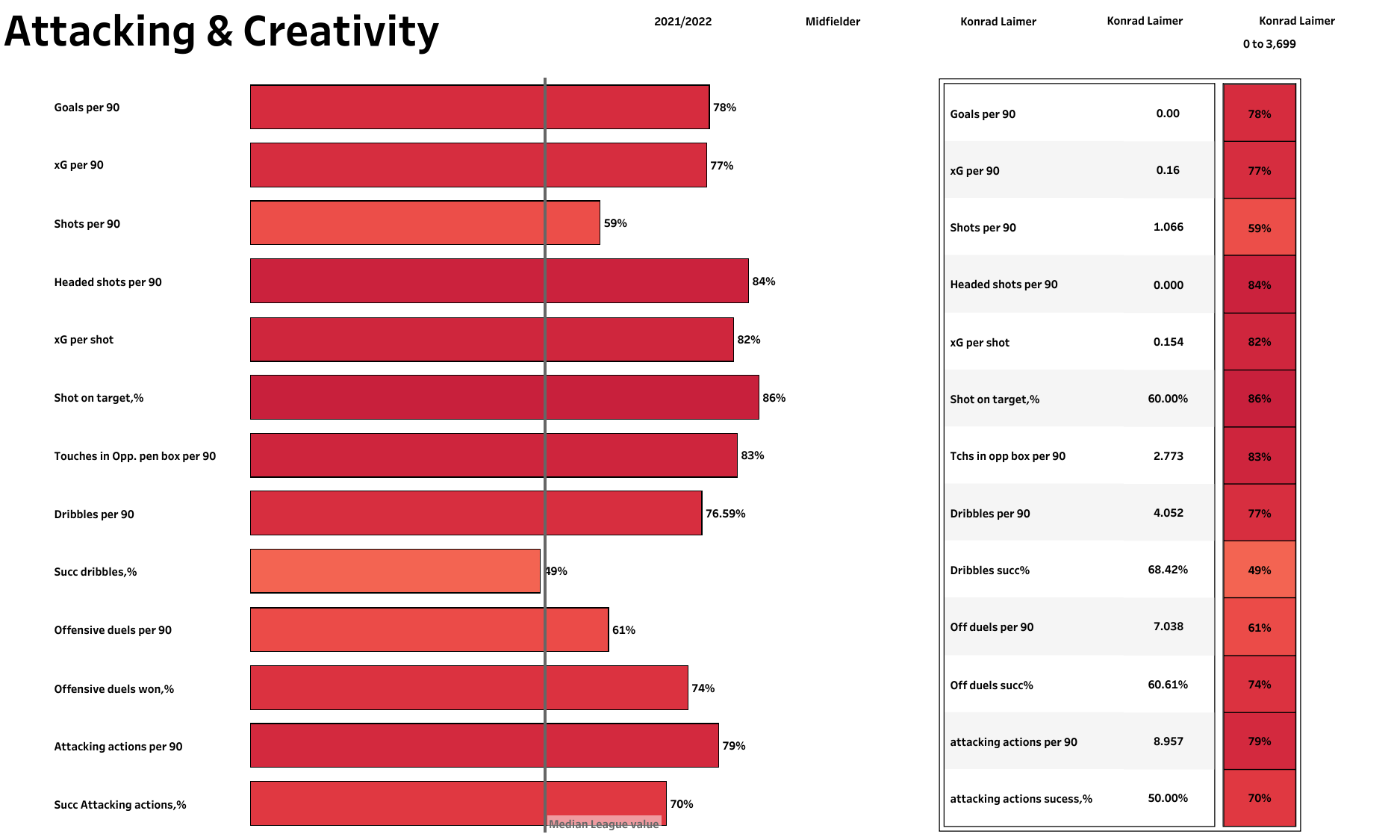 Laimer featured in 43 matches for RB Leipzig last season in all competitions, which included all six UEFA Champions League games. He played for 405 minutes and provided one assist. Despite failing to score a goal, he generated an xG per 90 value of 0.16. He attempted only 1.06 shots per 90 but hit a very respectable 60% of them on target. The Austrian man generated an xG per shot of 0.154, putting him in the topmost quintile among midfielders. He touched the ball in the oppositions’ penalty area 2.77 times per 90 and attempted just over four dribbles per 90. He was also involved in just under nine attacking actions per 90. 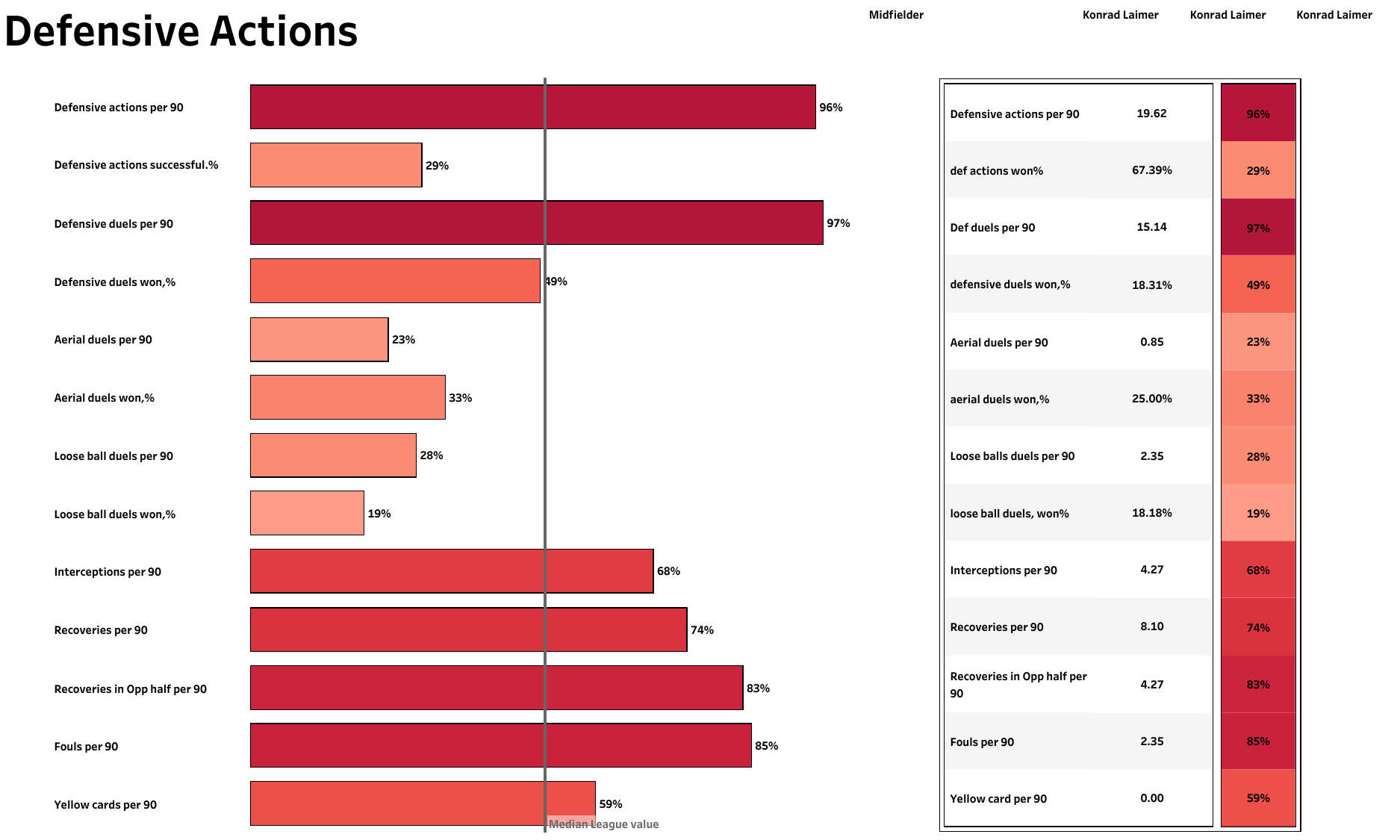 Laimer showed his industrious and hardworking nature by attempting 19.62 defensive actions per 90 and over 15 defensive duels per 90. Still, he was not as effective in either, ranking in the bottom third for successful defensive actions and in the bottom half for defensive duels won. He could win only a quarter of his attempted aerial duels. He made 4.27 interceptions per 90 and 8.1 recoveries per 90. The Austrian man displayed his ability to press high up the pitch with 4.27 recoveries in the opponent’s half per 90. His willingness to press hard went overboard at times, as he committed 2.35 fouls per 90. 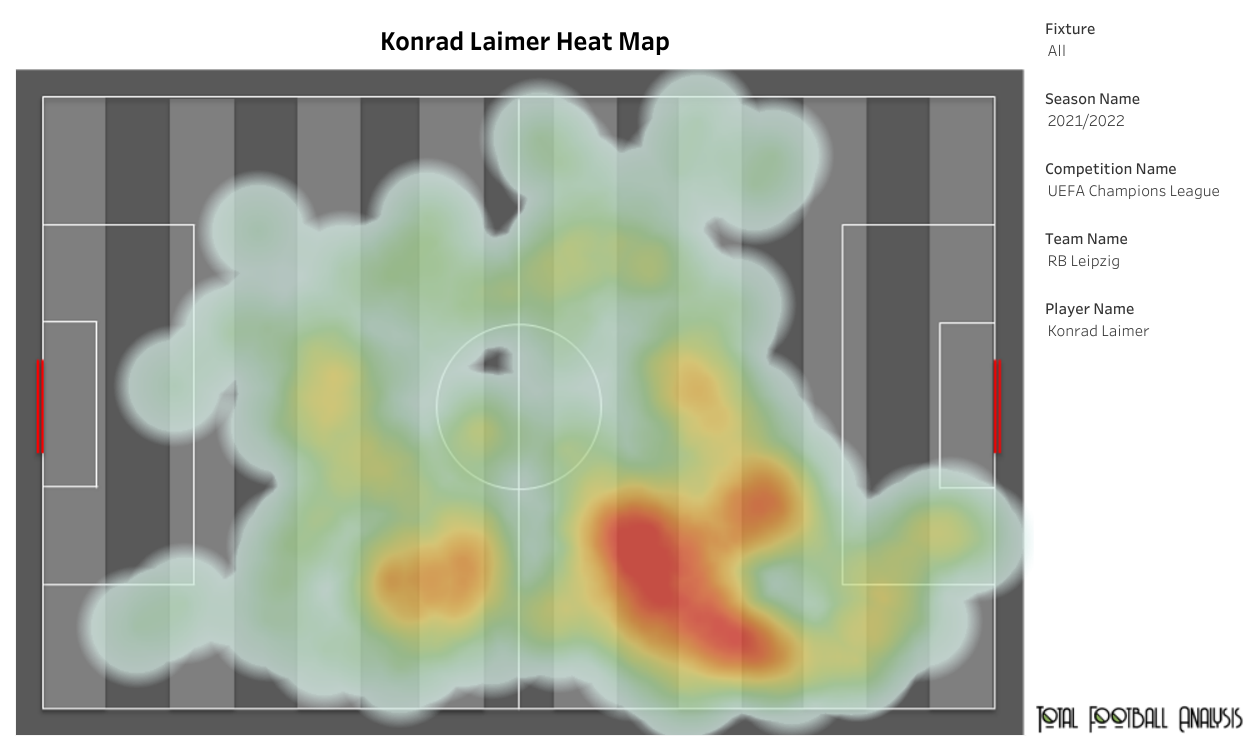 Despite being listed as a central midfielder, Laimer was most active on the right-hand side of the pitch. His willingness to work hard high up the pitch can clearly be seen in the above heat map. Defensively, the Austrian man attempted a whopping 42 pressures per 90 (of which 12.9 were successful), 4.22 tackles & interceptions per 90 and 2.22 blocks per 90. Going forward, he completed 3.27 progressive passes per 90, 1.73 passes into the penalty box per 90, 7.31 progressive carries per 90 and 3.08 carries into the final third per 90.

Konrad Laimer is a very hardworking midfielder and is the epitome of a box-to-box midfielder. However, with his contract expiring next summer, RB Leipzig are in a somewhat tricky situation. They have to either extend the contract of the midfielder quickly or risk him losing for free. Moreover, Bayern do not really need Laimer as they have the likes of Kimmich, Goretzka, Gravenberch, Sabitzer and even Musiala, who can play as central and/or defensive midfielders.