After the disappointment in the Champions League, Bayern Munich will now start planning summer transfers to bounce back strongly in the European competition next year. The Bavarian club are already linked with several players to add depth to their frontline. Serge Gnabry is one of the key players who will try to renew his contract at Bayern, but his contract negotiations are currently at a standstill. Bayern have been considering their options in case Gnabry leaves the club in the summer. The Bavarian club is unlikely to allow Gnabry to leave on a free transfer, so a move away from the club could take place if contract talks continue to stall.

RB Salzburg’s Karim Adeyemi is under consideration at Bayern as a possible replacement for Gnabry. Adeyemi has been on Bayern’s radar for some time now. The club were heavily linked with him before the winter transfer window, but could not complete his signing then. The young German international also faced Bayern in the Round-of-16 of the UEFA Champions League. He has been enjoying a prolific season with Salzburg, scoring 20 goals across all competitions. His performances at the club level have also earned him caps for Germany. 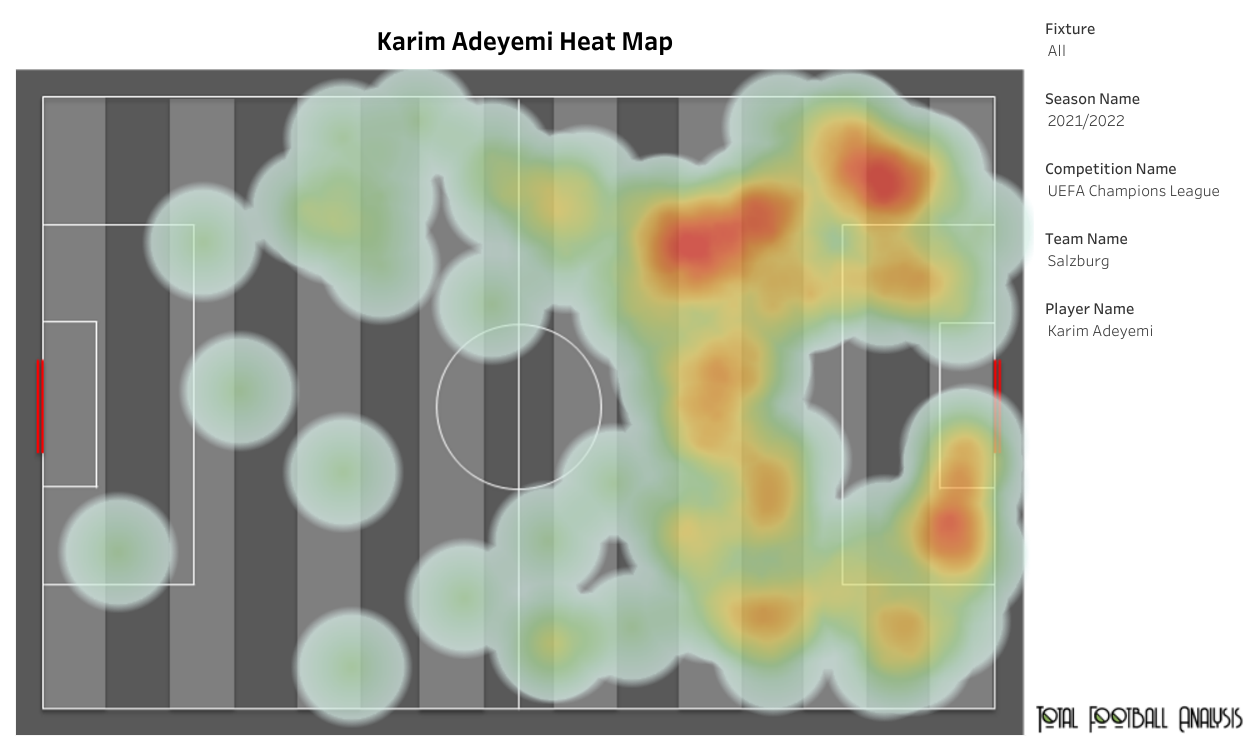 The teenager has primarily operated as centre-forward for Salzburg, but he can also play in wide positions. Adeyemi can play anywhere across the front three, giving a lot of tactical flexibility to the team. He can be a good option on the flanks and can also be given a chance through the centre if and when Lewandowski is rested. His heat map indicates that he is not an out-and-out striker. He prefers dropping deep to receive the ball and also drifts into wider spaces. 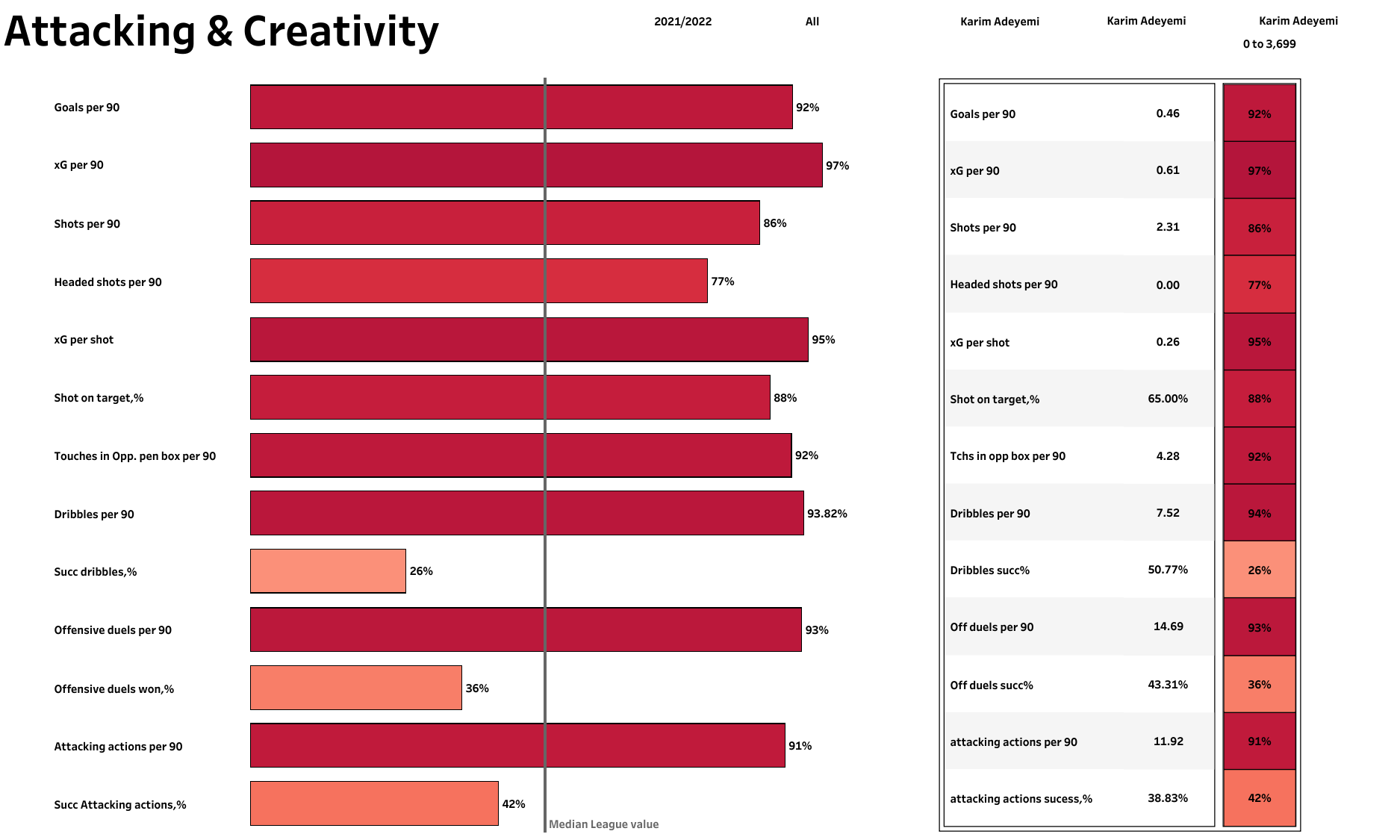 He can play on both wings and also upfront. He’s very quick and has a great burst of acceleration. This helps him get past defenders when he drifts into wider areas. Adeyemi is solid on the ball with good build-up play and great dribbling ability. He ranks highly for the xG he has generated every game and has also attempted 2.31 shots on goal per 90 minutes. He has managed to keep 65% of his shots on target. Adeyemi is a striker who loves to keep the ball at his feet and tries to dribble past defenders. He has attempted 7.52 dribbles per 90 minutes and has completed 50% of his dribbles. 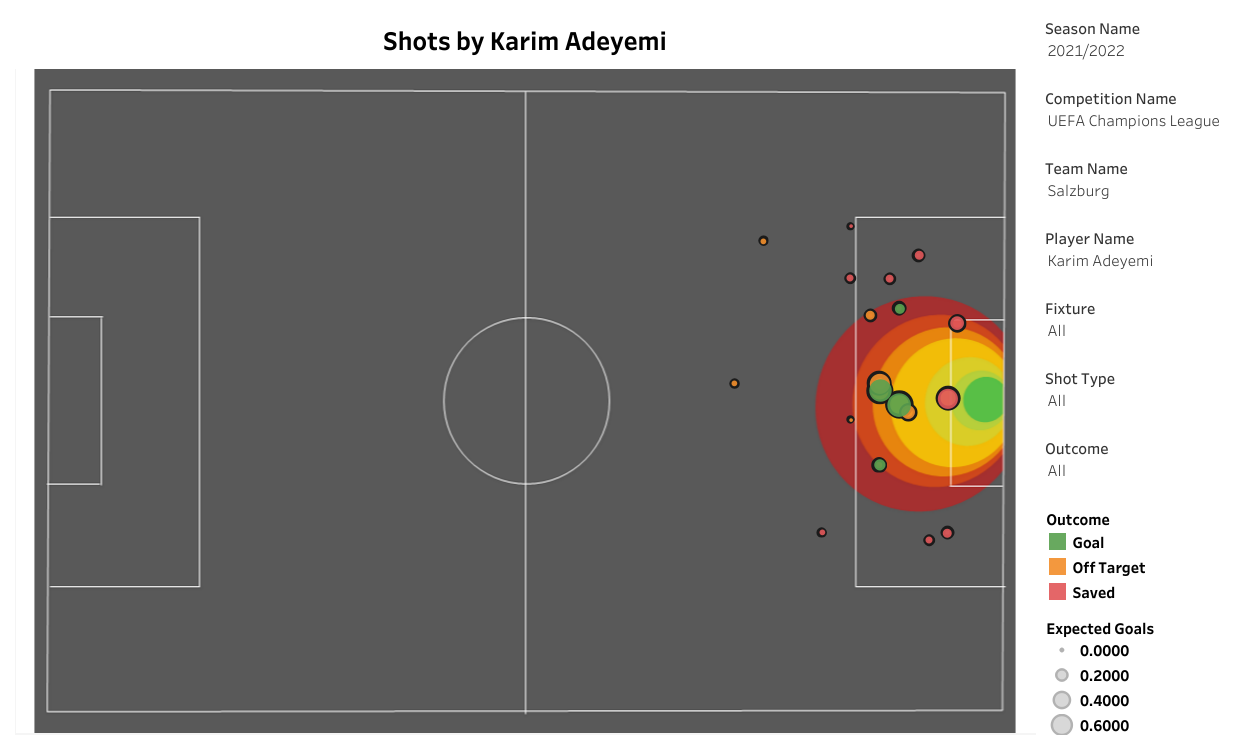 His shot map indicates that he is very threatening from both sides of the pitch. He creates space for himself inside the penalty area and can get past defenders with his quick movement. When he’s in wide areas, he tries to cut inside on either wing rather than whipping in a cross and exhibits attributes of a second striker. 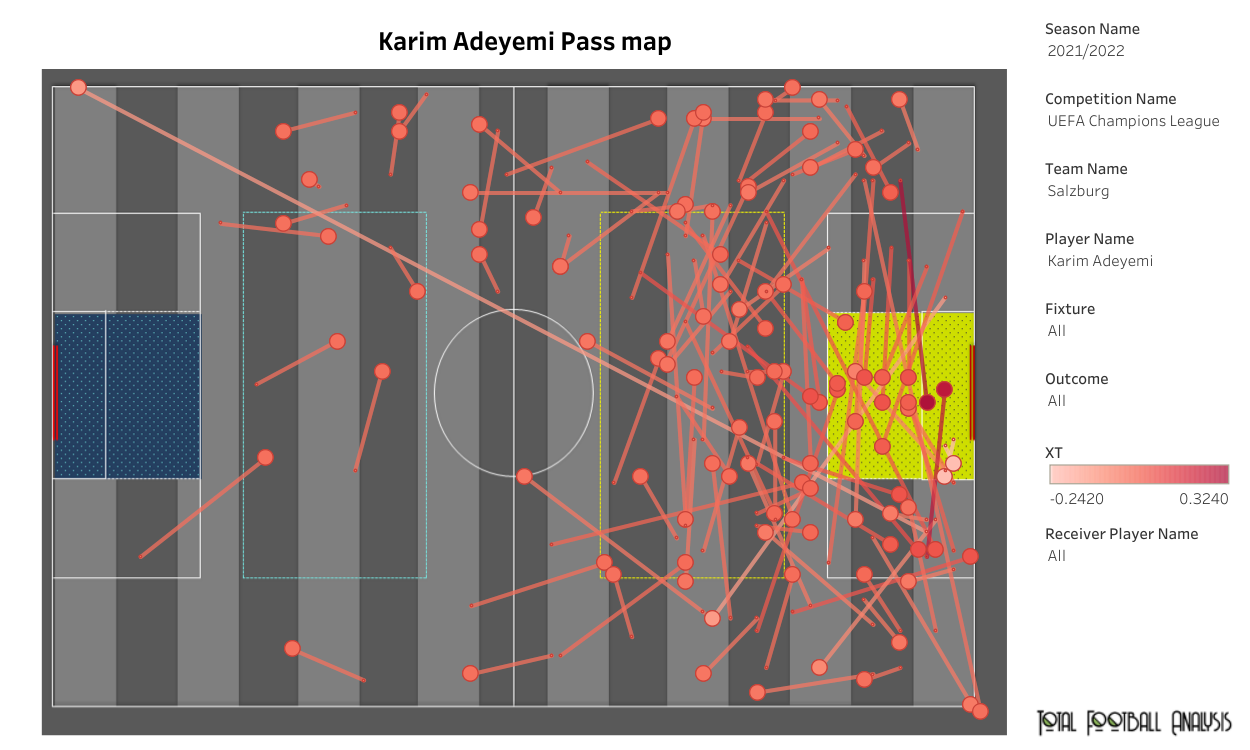 His pass map indicates how immensely he is involved in the build-up play towards goal as we can see that he drops deep to receive the ball and play quick one-twos with his teammates to create space. He has played several passes into great areas inside the penalty area and has generated a high xT from these passes. Adeyemi is a selfless striker, who does well to combine with his attackers and can find the right pass when he gets into threatening positions inside the final third.

Die Roten’s move for Adeyemi will be decided entirely on what happens with Gnabry. The Bavarian club may have to set a deadline for Gnabry to accept the new contract. Several European giants, notably Borussia Dortmund, are interested in signing the talented German attacker. However, Dortmund are yet to reach an agreement with Salzburg for his transfer. Bayern may have to move quickly if they decide to sign Adeyemi. The young forward can be a great addition to the Bayern’s squad.