Bayern Munich’s 2021-22 UEFA Champions League campaign was a bit of a damp squib. After topping their group ahead of Benfica, Barcelona and Dynamo Kiev, they thrashed Red Bull Salzburg 8-2 over two legs in the Round of 16. However, a shock exit to Villarreal in the quarter-finals was unexpected. Hoping for UCL glory, Die Roten have done some squad rebuilding this summer. However, an existing member of the squad, Joshua Kimmich, could be a key cog in the Bavarian machine this season as they attempt to win their seventh UEFA Champions League.

Kimmich appeared for Bayern Munich in 39 matches across all competitions last season. This included eight in the UEFA Champions League where he was influential despite not scoring a goal or providing an assist. Since Bayern spent the majority of their time in the attacking third, he was very active in the opponent’s half. His footballing IQ is clearly at another level compared to the vast majority of the players. It is this intelligence that has seen him find space in the final third more often than not. 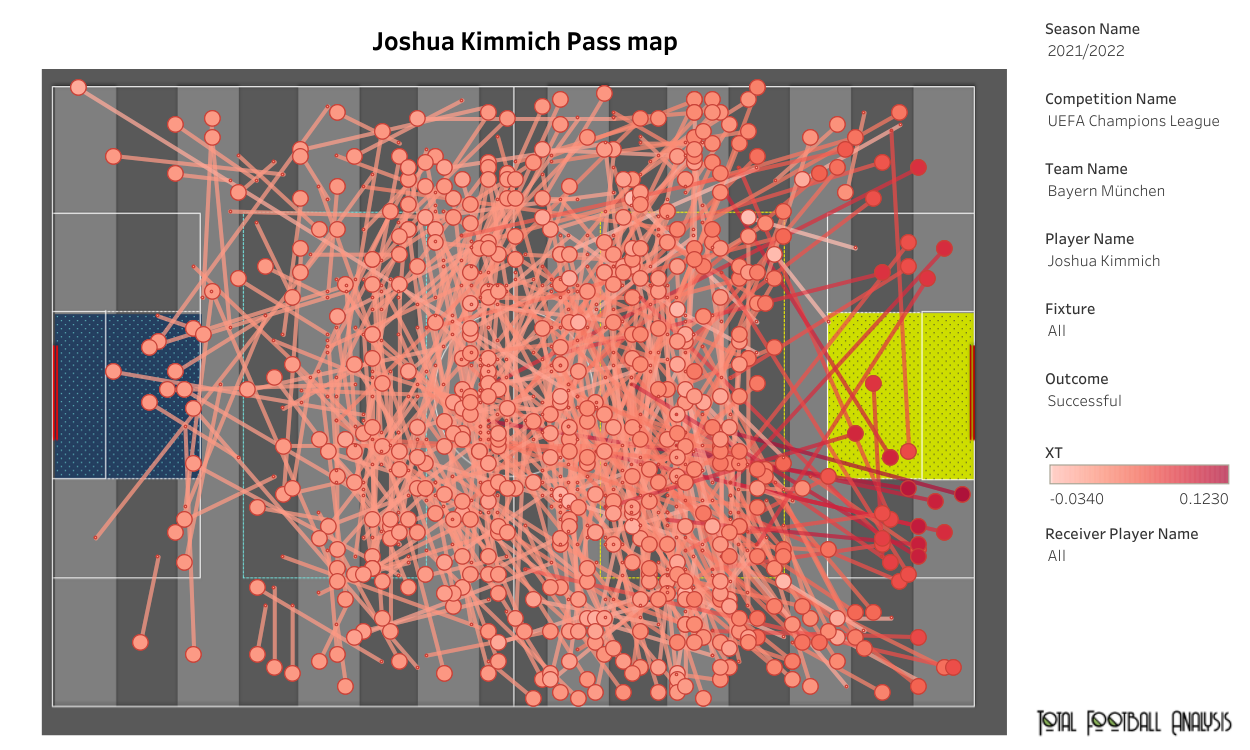 Kimmich was very dependable with his passing, completing just under 600 out of the 690 passes he attempted. This ranked him second only behind Benjamin Pavard. He completed the most progressive passes (81), the most passes into the final third (76), the third-most key passes (19) and the second most passes into the penalty box (22) in the Bayern squad. He also passes the longest of any Bayern man, completing a distance of 12,286 yards. Besides his passing, he was quite adept at carrying the ball, making 60 progressive carries and 18 carries into the final third. He also completed 80% of his dribbles.

Kimmich won duels in nearly all areas of the pitch. Most of his successful duels have come in the form of ground-based duels and 50/50s, and at 177 cm tall, he was not really expected to win much aerially. His pressing has always been useful, particularly in the higher areas of the pitch. He won nine such duels in the final third. He attempted the second-most pressures (135) and had the highest successful pressures (55) last season in the Die Roten squad. He also made 29 tackles & interceptions, 12 blocks and six clearances.

Joshua Kimmich remains the most important midfielder for Bayern Munich, despite the addition of Ryan Gravenberch and the explosiveness of Leon Goretzka. The Bavarians will hope that he can stay fit throughout the season, particularly in the second half as they look to reclaim the UEFA Champions League crown.