For the past couple of decades, Bayern Munich have seen multiple talented players successfully stepping up from their reserves to the first team. The German forward, Thomas Muller, is a brilliant example of this approach, having been a key player of the squad for more than a decade. Another player who can fit into this story for Bayern is Jamal Musiala. Musiala has potentially established himself as one of the most exciting prospects in Europe. During the 2020/21 campaign, he was the young star who was seamlessly integrated into the first team. The teenager came up with good performances throughout the campaign for Bayern and has since been there in the first team. The youngster has been tipped to be the long-term replacement of Muller in the first team at Bayern. Musiala ended his debut season with seven goals and one assist across all competitions. This season the youngster has scored four goals and provided four assists. 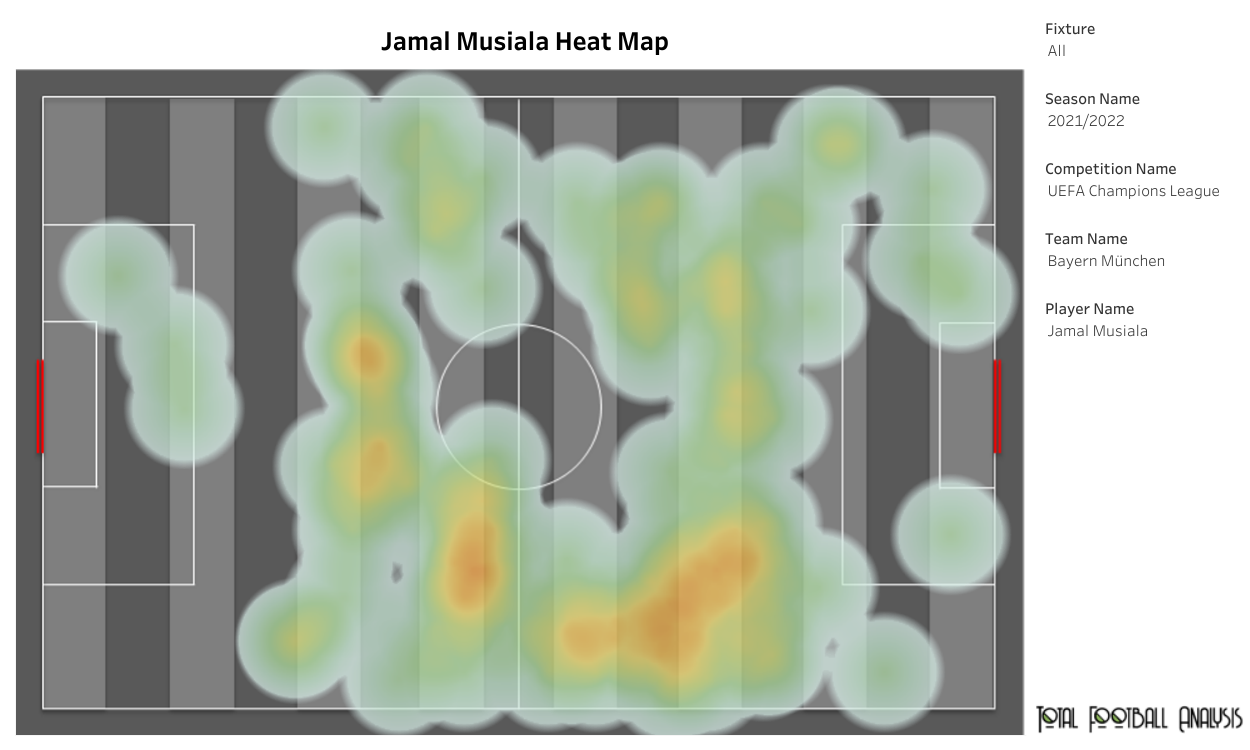 Musiala is an extremely versatile midfielder who has already proven himself in both wide and central positions. The youngster was deployed in a deeper role by Julian Nagelsmann during the last few games, as Musiala operated as a number eight, making runs from the deep and often forming a double number ten when Bayern have the ball and are on the front foot. 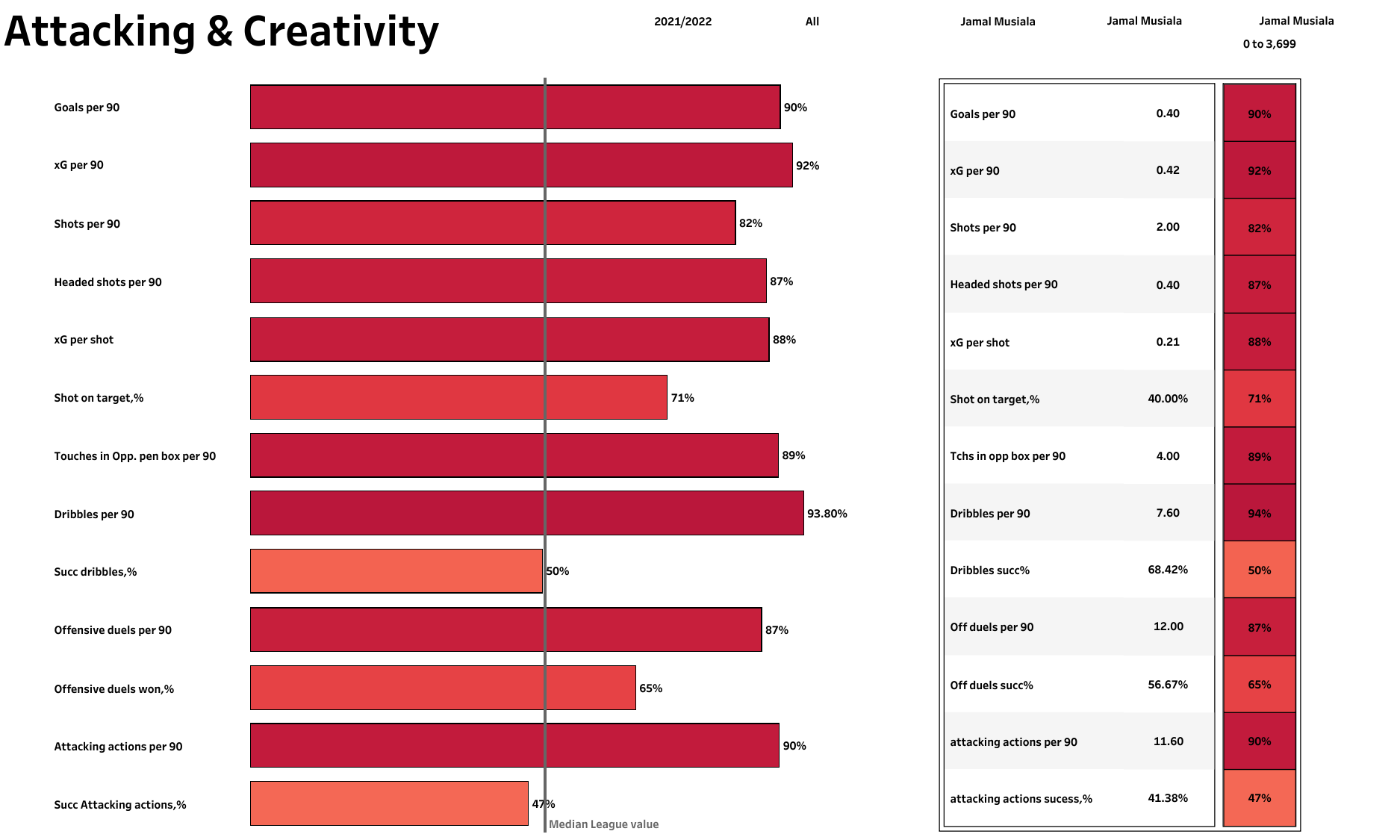 The attacking and creativity stats indicate that the metrics have been significantly better than the average median value. He has attempted 11.60 attacking actions per 90 minutes and has been able to complete 41.38% of these actions. On the occasions he was selected wide, Musiala posed an increased dribbling threat. Musiala had a dribble success rate of 68% and was able to beat his man in one-on-one situations. He was more likely to be selected towards the left, from where his full-back overlaps him, and given he is right-footed, Musiala regularly cut infield to combine with others. 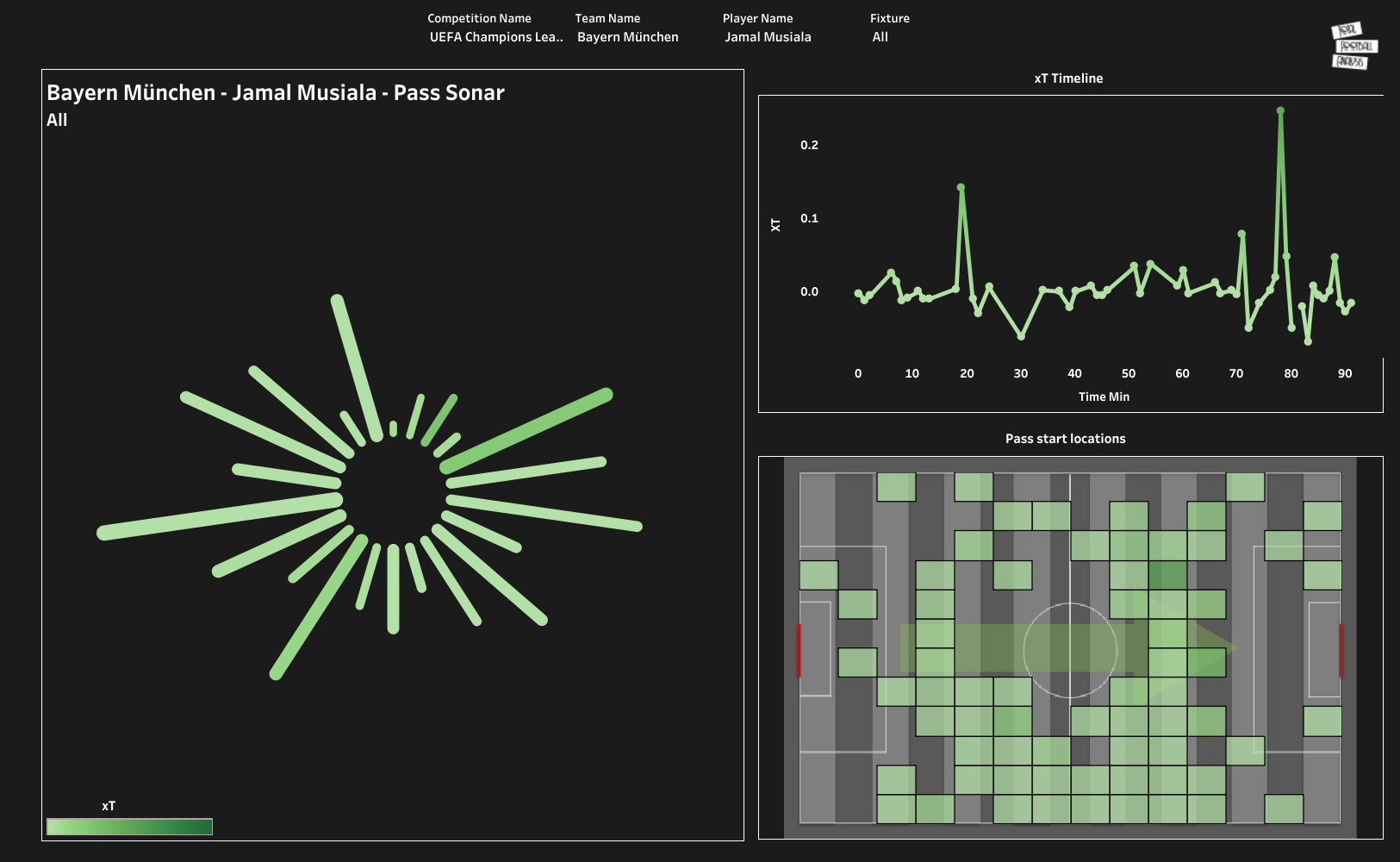 His passing ability has contributed to him featuring as both a number 10 and as one of two defensive midfielders, but it is in the latter role where his passing range has greater potential, when he links defense to the rotating attackers in front of him via his variety of passing techniques. His pass sonar indicates he has played passes all around the pitch and has also created a high threat with his passes. The pass start locations indicate he has played more passes in the wider areas of the pitch as he was utilized as a wide midfielder in the Champions League.

The 18-year-old signed a permanent contract with Bayern last year, which keeps him at the club till the summer of 2026. In the future, there is a good chance of Musiala becoming the first-choice number ten at Bayern. For now, he is likely to play as an eight or wide player. Even though he has taken big strides in the last 18 months, there is still a lot to learn for the teenager. For now, Musiala’s focus will be to contribute with goals and assists to help Die Roten win the Champions League and Bundesliga. He may not be an automatic starter when all senior players are fit and available, but there will be enough opportunities for him to make an impact for Bayern Munich in the future.