The best possible news for Bayern Munich came during the international break. The defending Bundesliga champions will be having the entire squad available for the next Bundesliga game against Freiburg. The most awaited comeback for Bayern was that of Alphonso Davies. Davies has been on the sidelines for more than two months. He has been sidelined since January because he started suffering from myocarditis, a mild heart condition related to COVID-19, and it has been a slow road to recovery.

In the absence of Alphonso Davies, Nagelsmann has tried to use a back three to get some sort of balance in the team. The outcome of this switch has been mixed as the team delivered inconsistent performances. The approach of having wingers as wing-backs did yield better results in the final third, but it left Bayern wide open on counterattacks. Kingsley Coman has been covering up at times in the left wing-back position and has performed well. The return of Davies will allow Nagelsmann to use a back four, giving the team perfect balance in the attack and defense. 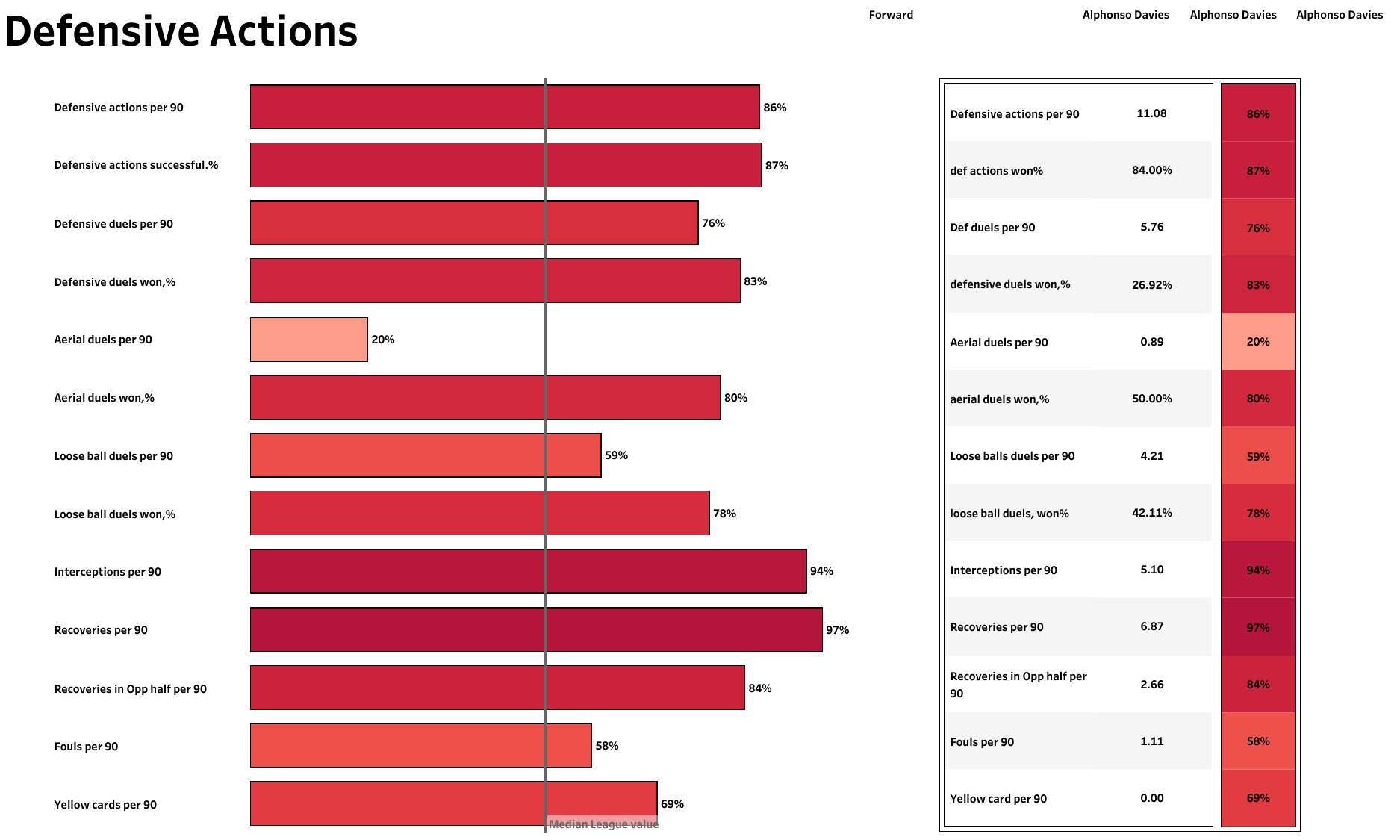 The above visual shows us the defensive actions of Davies from the UEFA Champions League. Davies has featured in five games for Bayern in the Champions League and has started in all five games. Davies has attempted 11.08 defensive duels per 90 minutes and has won 84% of these defensive actions. He made 6.87 recoveries per 90 minutes. His explosive pace not only helps Bayern on the counter but also helps to defend against the opposition’s counterattacks. He gets back into defensive positions quickly and can recover possession of the ball for his team. 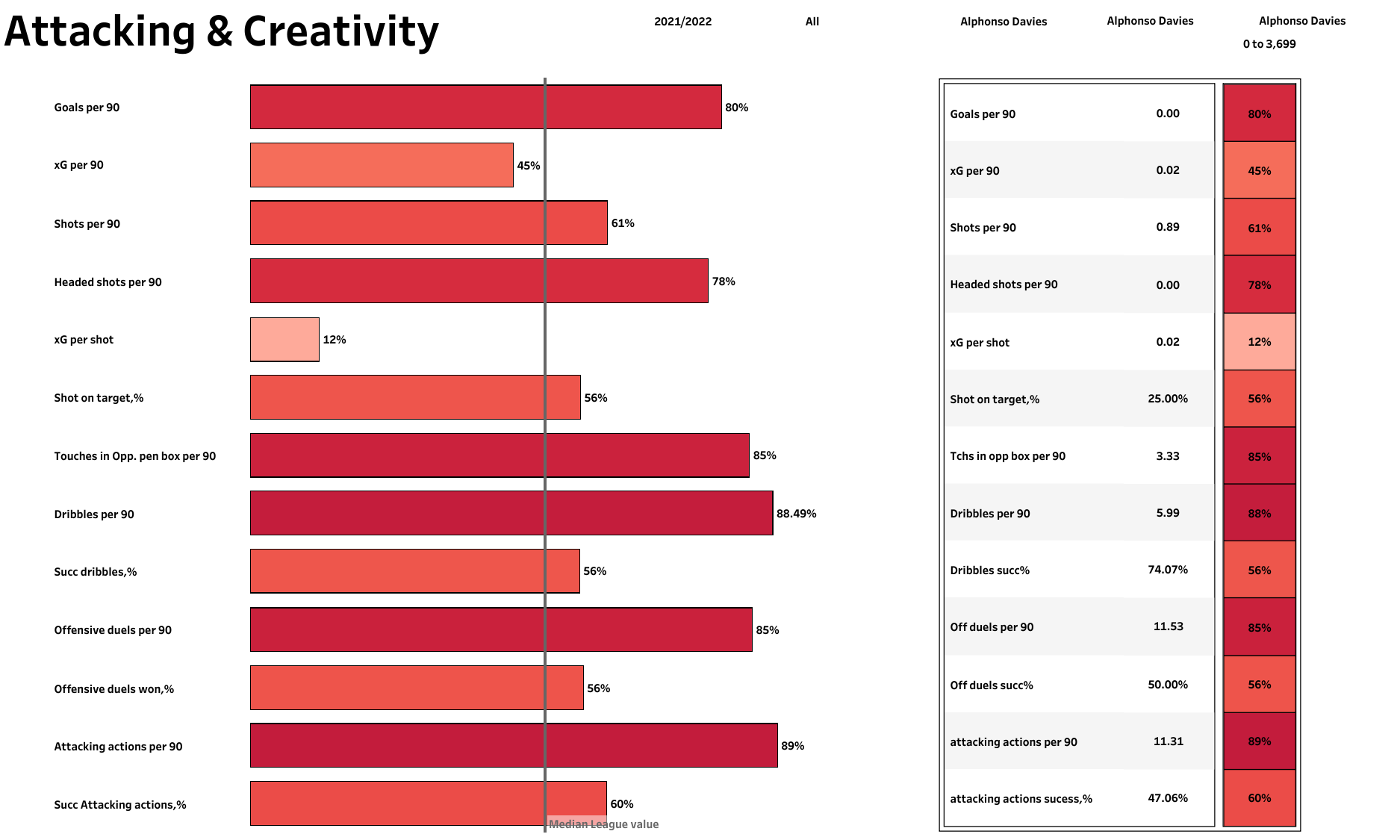 The 21-year-old has started the 2021/22 season strongly, providing four assists in his first eight league games. He also has two assists in the Champions League. The above visual shows us the attacking and creativity metrics for Davies from the UEFA Champions League. The left-back has attempted 11.31 attacking actions per 90 minutes and has been able to complete 47% of these actions. He has been ranked highly for the number of dribbles he attempted down the right flank and also has a high success rate. He has won 50% of his offensive duels and is a huge threat with the ball at his feet. 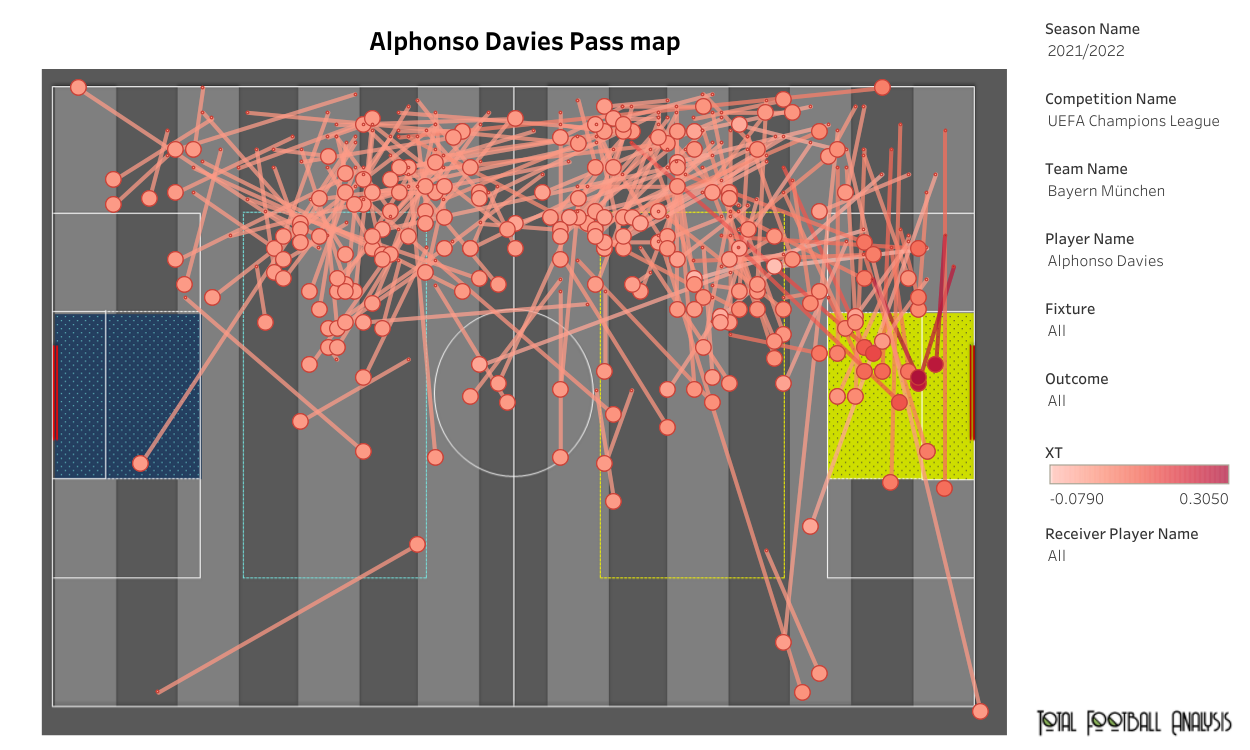 Davies holds the width on the left and creates chances for his teammates. He has six assists to his name across all competitions. His pass map indicates that Davies was highly involved in Bayern’s build-up towards the goal from the left flank, and he has also generated a very high xT from his passes into the penalty area. He has played 10.42 forward passes per 90 minutes and ranks in the 93rd percentile for the same. The Canadian has attempted 3.55 crosses into the box per 90 minutes and has completed 61.54% of his passes inside the final third.

The return of Davies will be the biggest boost for the squad. It will allow Nagelsmann to use a back four, giving the team perfect balance in the attack and defense. Bayern Munich look like a more threatening side with Alphonso Davies on the left flank. Bayern will have to be patient with his return as the Canadian has not played competitive football for over two months now. He might get a chance to feature in some of the league games as a substitute and will try to be gain match fitness for Bayern’s UCL draw against Villarreal.